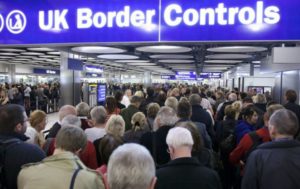 The number of European Union citizens leaving the UK is at its highest level for a decade with 130,000 quitting Britain in the year to September, the latest figures show.

But far more EU nationals – around 220,000 – moved to the UK in the same period, the UK’s Office for National Statistics (ONS) found.

This means net EU migration to the UK was just 90,000, the lowest for five years.

The latest data also shows more British people are migrating than are returning to live in the UK.

Of those EU nationals arriving in the UK, fewer were coming for “work-related reasons”, in particular to “look for work”.

At the same time, migration to the UK from countries outside the European Union is rising meaning that the UK’s population is continuing to grow at similar levels to recent years.

This puts the net number of migrants to the UK at 205,000, the highest for six years.

The figures have been released as the UK continues to negotiate its exit from the European Union after the Brexit vote and amid continuing polarised debate about levels of migration.

Experts say the rise has been largely driven by more people coming to study in the UK and an uncharacteristic dip in the previous year’s figures that may have been corrected.

There is also speculation that UK firms are beginning to struggle to recruit or retain people from the EU, forcing them to look elsewhere.

The overall net migration figure is still well short of the government’s target to reduce net migration to below 100,000, a pledge made in the 2010, 2015 and 2017 Tory manifestos.

The most numerous nationality starting work in Britain last year were Romanians, followed by Poles, Italians, Bulgarians, Spaniards and Indians – who accounted for more than half of all skilled work visas granted.

Immigration experts say the UK has become a significantly less attractive place for European citizens to work since Brexit and it is no surprise that more EU workers are leaving the country.

They say that the UK government may see this as good news in that it is delivering on its promise to curb immigration, it presents a significant threat to UK businesses which are already struggling to hire the skilled workers they need.

And that the government’s plan to double the surcharge the levy on migrant workers for access to the National Health Service will further impact recruitment for the EU.