Home » Latest Articles » Has the US banned Muslims?

Has the US banned Muslims? 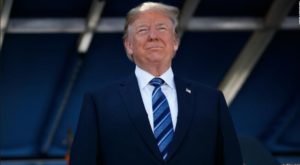 The Trump administration appears to have unofficially banned Muslims entering the United States, according to new data from the State Department.

And the overall flow of refugees to the US has slowed to almost none, suggesting that what President Trump could not achieve by executive order, it is accomplishing by strangling the bureaucracy.

One of President Donald Trump’s most controversial and trenchant campaign promises was to enact a “total and complete shutdown” of Muslims entering the United States.

Now, the latest data from the State Department, which oversees the US refugee program, shows that 1,891 Muslim refugees have been allowed to enter the country so far in the 2018 US fiscal year, which began on October 1

This represents a 90 percent decrease on the same period last year, when the US admitted 18,342 Muslim refugees.

The figures are even more dramatic when it comes to Syria, where more than five million people have fled the conflict that is now eight years old.

Just 44 Syrian refugees have been resettled in the US in the first six months of the fiscal year — compared to 5,839 over the same period last year.

Of those 44 Syrians, only 27 identified themselves as Muslim.

Across the US, the administration has cut the staff that conducts clearance interviews overseas, intensified the screening process for refugees, and for people it characterizes as high-risk, doubled the number who need to be screened.

As a result, if the trickle of refugees admitted continues at its current pace, just 20,000 are projected to enter the United States by the end of this year, the lowest figure since the resettlement program was created with passage of the Refugee Act in 1980.

A total of 13,051 refugees of all backgrounds have been admitted, making it unlikely that the administration’s originally planned cap of 45,000 — about half the number that came during the last year of the Obama administration — will be met.

“Its death by a thousand papercuts,” said Jennifer Sime, senior vice president at the International Rescue Committee, one of the nine national resettlement agencies contracted by the State Department.

“Little by little — until you get to the point where nobody is coming,” Ms Sime said.

Even before Mr. Trump took office, resettlement of refugees was a protracted, interagency process, with vetting often taking two years.

Soon after Mr Trump became president, he moved to shut down the flow of refugees to the United States through a series of executive orders, an effort that was initially stopped by the federal courts.

That was supposed to have ended in January.

Refugees from all nations who had already been through initial screenings waited to be interviewed by officers of United States Citizenship and Immigration Services at camps and cities around the world. But the frequency of those interviews slowed considerably.

One of the reasons was a large backlog in applications from immigrants seeking refuge in the United States under a different process—filing applications for asylum from persecution in their homelands, mainly Central America.

Under international law, the United States cannot turn away or place caps on applicants who, unlike those applying for refugee status from the other side of the world—actually show up at the border.

In recent months, the immigration agency diverted 100 of its 215 refugee officers to conduct asylum interviews.

A State Department spokesperson told US media it was “too early to determine” how many total refugees will be resettled in the US in the 2018 fiscal year.

The spokesperson said that the US had provided nearly $7.7 billion in humanitarian assistance for displaced Syrians.