More than 10,000 refugees seeking asylum in Hong Kong are trapped in a protracted legal limbo.

Hong Kong is not a signatory to the 1951 Refugee Convention which established refugee rights and the responsibilities of nations that grant asylum. 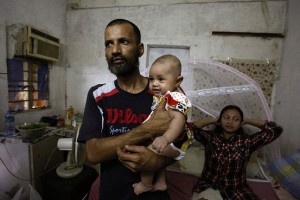 But the former British colony is bound by the Convention Against Torture, an international treaty that prevents Hong Kong from expelling people at risk of torture.

Because of these arrangements, refugee claims can take years to decide.

And the chances of being granted asylum in Hong Kong are slim with just 31 people attaining protection status since 1992.

Most of Hong Kong current refugees are mostly from India, Vietnam, Indonesia, and Africa and many live in abject poverty on farms and in slums.

“They [refugees] still don’t have any legal status here in Hong Kong,”

The circumstances in which many asylum seekers find themselves in Hong Kong have given rise to racketeering and a black market in fake asylum claims.

Under a new Unified Screening Mechanism introduced in March last year, asylum seekers may lodge non-refoulement claims with the Immigration Department on grounds including torture, inhuman or degrading treatment or punishment, and persecution.

Many are torture survivors who badly need legal and psychological support to prove their case and to recover from their trauma, Ms Otero said.

“When you’re recounting your story, you need assistance. Trauma is such a huge thing that it can actually inhibit you from telling your full story,” she said.

The most traumatised refugees tend to be unaccompanied children, survivors of sexual and gender-based violence, single mothers, and survivors of torture.

As almost all have psychological problems, if they are unable to get the support they need there may be serious consequences, such as suicide attempts.

“If they can’t get psychological support, it’s a barrier to rehabilitation. You can’t rebuild your life until you get healed psychologically and physically,” Ms Otero said.

But the good news is that a new initiative called Operation Santa Claus is offering access to justice services with legal and psychological support for asylum seekers.

Supported by refugee lawyers, psychologists and social workers, over 1,000 asylum seekers will be assisted while about 380 who are “most vulnerable” will receive intensive individual help. Last year the project has helped 1,300 claimants and provided 100 with intensive help.