Terrorism and forced migration are most pressing humanitarian challenges now and for the immediate future, according to a new annual Humanitarian Index. 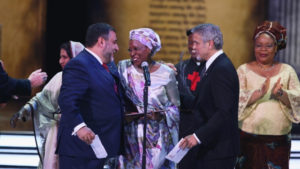 Global humanitarian initiative, The Aurora Prize for Awakening Humanity, has created the first annual Humanitarian Index to identify the most imperative contemporary humanitarian crises, as well as their causes and the responses they invoke.

It surveyed participants from the US, UK, France, Germany, Lebanon and Iran to examine perceptions versus reality of critical humanitarian issues.

The respondents named terrorism as the “most pressing humanitarian challenge now and for the next five years, followed by forced migration,” according to the Index.

Americans in particular underestimated the migration crisis, collectively viewing it as the seventh most pressing humanitarian challenge.

Perceptions of the American, British and French participants often proved inaccurate. A huge disparity was noted in regards to underestimating the sheer number of Syrian refugees by shocking amounts – 4.7 million, 4.5 million and 4.5 million respectively, the Index found.

The respondents were found to largely minimise the role of neighboring countries that take in refugees. A mere 15 per cent identified Turkey as “the country with the highest intake of refugees globally, and only two per cent recognise Pakistan’s role in offering safe refuge,” according to the Index.

Contrastingly, the respondents overstated the number of Syrian refugees that their country had taken in. The French and German participants in particular exaggerated the number of refugees hosted by a factor of five, the Index found.

“Frontline states taking in refugees from neighboring wars are overwhelmed by the economic, social, human rights, political and security implications of rapid, massive influxes of people. Ultimately, any credible response to the crisis must address its principal driver—an upsurge in wars,” said Jean-Marie Guehenno, President of the International Crisis Group and judge of the prize.

The amount of refugees resulting from the Syrian conflict in particular was stressed, while participants generally ignored the high volume of refugees from various countries in Africa and Asia, including the Democratic Republic of Congo and Myanmar.

Just 8 per cent of participants acknowledged the scale of the crisis in Sudan and South Sudan, which has resulted in over one million refugees, says the Index.

In America, one in five participants incorrectly cite Mexico as the “highest source of refugees globally,” according to the Index.
The Western countries surveyed showed a belief that their governments had “done more than enough to offer refuge to those in need,” the Index said.

Americans believed that their government provided asylum to three times as many Syrian refugees as they have in reality.
This is also reflected in France and Germany, where “estimates of the number of Syrians given asylum due to conflict were five times greater than the actual figures,” the Index said.

According to Mr Guehenno, the crisis will “only get worse unless world leaders… are buttressed by a better-informed public awareness of its true causes and dimensions.”

“What this report highlights is the urgent need to inform the public of the global refugee crisis; the defining humanitarian challenge of our time,” he said.

“A passionate and mobilised public is critical to both ensuring support for the investment necessary to alleviate human suffering and also to hold political leadership accountable for tackling the root causes of the crisis,” said Dominic MacSorley, Chief Executive Officer of NGO Concern Worldwide.

The Index also found that 63 per cent of those surveyed in the Western countries believed that asylum seekers move for “aspiration reasons”, compared to the 70 per cent who contend they move to escape the reality of conflict.

A major problem identified in the report was the “compassion gap”, that is, the discrepancy between “what people say and feel versus what they would be willing to do,” according to the Index.

While the majority of respondents believed that refugees deserved help, only one in two would “actually help Syrian refugees if they could, and most doubt their ability to make a real difference,” according to the Index.

Forty nine per cent of those surveyed have “abstained from taking action… due to concerns about how their monetary contribution will be used,” the Index said.

However, “what is encouraging is that the research shows that although individuals might struggle to turn compassion into action, the public realizes that those humanitarians who do intervene on behalf of others can have a tremendous impact,” said Vartan Gregorian, President of the Carnegie Corporation of New York and a member of the Aurora Prize Selection Committee.

“Despite inertia and cynicism, the public sees helping as a badge of honor,” according to the Index.

The Index showed there was “great respect” for the individuals who actively lend a hand in regards to humanitarian aid by 71 per cent of those surveyed. Sixty nine per cent further agreed that it takes “great courage” to deliver such assistance.

The Index concluded it would take a “clear sense of individual responsibility to help, transparency with regard to the use of donations, and creating a global community that rewards those delivering humanitarian aid” in order for the public to take responsibility and action towards resolving the humanitarian crisis.

Created by survivors of the Armenian Genocide, the Aurora Prize for Awakening Humanity is granted annually to an individual whose actions have had an exceptional impact on preserving human life and advancing humanitarian causes.