Read about the latest news, research and initiatives from migrant and refugee settlement agency AMES Australia. 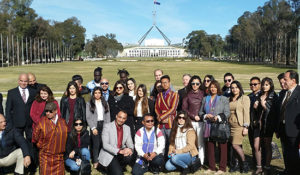 A group of AMES Australia clients and staff recently made a trek to Canberra to take part in the Federal Government’s keynote refugee week event.

Former AMES Australia client and employee Karen refugee Kaw Doh Htoo topped a line-up of speakers giving a heartfelt account of his journey from a refugee camp on the Thai-Burma border to opening his own business at Nhill, in western Victoria.

Prime Minster Turnbull told the gathering that Australia has one of the most generous refugee resettlement programs in the world making it one of the world’s most successful multicultural societies.

“Last financial year we accepted around 20,000 humanitarian entrants, which is the highest number in three decades,” Mr Turnbull said.

The group also made a brief tour of Canberra taking in the Mt Ainslie lookout and Old Parliament House.

Two refugee clients gave a brief talk to a group of schoolchildren they encountered on the trip.

“It was truly interesting and valuable for me to see my new nation’s capital and meet so many important people,” Mirwais said.

AMES Australia CEO Cath Scarth, who also attended the event, said it was important that decision makers in Canberra were able to meet refugees face to face to get an idea of their challenges and also their strengths and resilience. 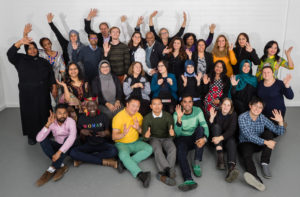 Students from the 2018 Prevention of Violence against Women (PVAW) course gathered recently at the Multicultural Hub for their formal graduation from the course.

The course, facilitated by AMES Australia Senior Manager Prevention of Violence against Women, Respect and Responsibility Program Wendy Lobwein, developed some innovative strategies and also harvested ideas from the students themselves.

“The course has built the capacity of leaders from CALD communities to be able to lead actions to reduce violence against women in their own communities and also in the broader Australian community,” Wendy said.

The 28 graduates from the 2018 course joined 2017 graduates to create a force of 65 CALD community members who are currently raising awareness and taking actions all over the State.

The event was a great celebration of the contribution each student had made on the course and the valuable information that each participant took away.

“The PVAW in CALD communities Leadership Course attracts people of all ages, from all communities and occupational areas, and increasingly men are stepping forward and taking their place in building better and safer communities” Wendy said.

The successful two day workshop, which is the seventeenth of its kind, began with a welcome from AMES Australia’s CEO Cath Scarth.

Some of the topics covered included insight into what employers are looking for, current trends in the Australian labour market and Australian workplace culture.

Students got the chance to talk to corporate volunteers about their employment journey and experience a corporate mock-interview, for which they received verbal and written feedback.

“A big thanks to all for participating and making the workshops come together,” Sarah said.

“We had fewer numbers than at past events, but the good news is that the reason for this is that many of our skilled migrants are getting jobs,” she said.