When I met Khadim Dai in Jakarta, Indonesia in November 2015 we instantly clicked. It was like we were long lost friends or family.

Khadim was only 19 years old and one of the refugees who started the Cisarua Refugee Learning Centre (CRLC) in Cisarua, Indonesia. 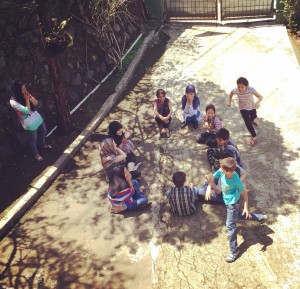 CRLC is a school set up by refugees for refugees to continue education while in transit in Indonesia. Khadim and I made the one-hour journey by two buses and a small blue van. I was amazed by the beauty of Cisarua and I welcomed the cooler climate.

I turned up at my homestay with a woman and her two children who lived close by to the school.

Tahira made me feel right at home. Her children enticed me to colour, draw and play with puzzles. I could not believe it. I thought all children only wanted to play on iPhones and iPads as they do in Australia.

Tahira got to work cooking up a feast while her children and I spoke English and coloured and played in Tahira’s room. Dinner time involved sitting on the floor cross legged, eating with our hands the delicious food Tahira had prepared (this is the traditional Afghan way she told me).

The next day I was shown around CRLC where I would spend the next four full days volunteering. The school was a double story yellow building set amongst trees and with an area for children to play during break time.

I was introduced to the smiling volunteer teachers and staff. They are all refugees. Tahira was the most experienced teacher and Khadim had the roles of outreach manager and budding film-maker.

The teachers prepared a schedule so I could move between classes. Luckily, I had prepared songs and games to share. I had never seen children so excited to learn and the amount of respect they had for their teachers was impressive.

The teachers were also eager to learn the best way to teach their classes with the limited resources they had.

The teachers were all women and spoke of how their lives would have been very different if they had stayed in Afghanistan or Pakistan. Here they could each develop their passions to become a teacher.

School ran from 8:30am until 1pm Monday to Thursday as Friday is the day of rest. Once school had ended for the day, Tahira made sure we had a big lunch at her home.

I was lucky enough to sit around with Tahira, her family and her friends. I felt like part of a community for the first time in my life and I felt like these people were my family.

They were so caring and hospitable. I was not used to it and it made me question our individualistic values in a country like Australia. The staff and community at CRLC may be living in uncertain circumstances but they still had time for their families and valued education. They were not attached to technology 24 hours a day and their main aspiration was to be safe, something I take for granted.

When it was time for me to leave Tahira’s house and make my journey back to Jakarta and then Melbourne, I felt terribly sad to leave these special people who touched my heart.

Tahira and I hugged and she stood with her little boy out the front of their apartment in the rain to wave me off. As tears rolled down my cheeks, the guilt started to hit me as I was able to leave and they were trapped indefinitely in Indonesia waiting for their resettlement offers.

I may not have the answers to fix the current refugee crisis, but what I can suggest is that we try harder to understand where refugees are coming from and why they would risk it all to have safety, shelter and an education.

Carly Copolov is a PhD candidate at Swinburne University of Technology.