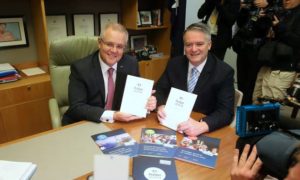 Like a cashed-up, drunken uncle at Christmas, there are things to like and dislike about the 2018-19 Federal Budget.

And there are important ramifications both positive and negative for people in the culturally and linguistically diverse (CALD), refugee and humanitarian sectors.

The Budget delivers tax cuts of up to $530 a year for low and middle income earners which will benefit many migrant and refugee families.

It adds $4.8 billion to Medicare over four years as well as $1.4 billion for new drugs to be added to the Pharmaceutical Benefits Scheme.

Victoria will get $7.8 billion for long-overdue infrastructure projects that will alleviate transport woes, especially in the outer suburbs.

The budget also will allow older Australians to earn more without their pensions being cut and it commits the Government to a $5 billion increase in funding for aged care including an additional 14,000 high-level home care packages, 13,500 new residential aged care places and 775 short-term restorative places.

The budget reveals Australia’s immigration intake will remain at 190,000 skilled and family visas each year.

Funded by an $80 billion surge in tax receipts, the budget also promises to deliver a $2.2 billion surplus in 2019.

Tax cuts for middle Australia that extend for seven years together with efforts to impose fiscal responsibility on debt show this is very definitely an election year budget.

But on the negative side, migrants will not be allowed to access welfare benefits until they have lived in Australia for four years. The previous threshold was two years.

The move will restrict access to key Centrelink payments including Newstart, paid parental leave, the Carers Allowance and the Family Tax Benefit.

However, newly arrived migrants who experience sudden financial loss due to a ‘significant change in circumstances’, including those who fall victim to family violence, could be granted exemptions.

Refugees who come on humanitarian visas fleeing persecution will still be exempt from any waiting time for benefits payments, as will their families.

But they will face a six month wait for job search services. Refugee groups have slammed the measure but the government says it will better streamline the settlement of humanitarian entrants.

“This measure will improve the sequencing of services available to refugees through programs such as the Humanitarian Settlement Program, the Adult Migrant ­English Program and Jobactive, assisting refugees to focus on settlement and improving language skills during the first 26 week period of their arrival,” the budget documents say.

The federal government is counting on the refugee deal with the US to contribute to savings of $759 million over four years in the Department of Home Affairs, the budget papers reveal.

Budget documents show the government plans to reduce its spending on offshore detention from $1.1 billion this year to $705m in 2018-19.

Spending will then decrease to $327m in 2019-20 and remain steady in the two years after that.

The government has also ­recently said it aims to close some onshore detention centres, and the documents suggest it believes this will also translate to a saving of $195m over four years.

AMES Australia CEO Cath Scarth said tax cuts of up to $530 a year for low and middle income earners would benefit many migrant and refugee families.

“We know that the cost of living is rising and many families are finding it more difficult to make ends meet so a little extra money in the family budget is welcome,” Ms Scarth said.

Ms Scarth said the measures in the budget to assist small business would also benefit migrants and refugees starting their own enterprises.

“We know that many migrants and refugees are entrepreneurial and we have supported a significant numbers to start their own businesses,” Ms Scarth said.

“In many cases they have started businesses when they have been unable to find permanent and durable employment so anything that helps get these businesses off the ground is welcome,” she said.

“We believe a strong and transparent migration program underpins a strong economy and maintaining current levels of migration is welcome and necessary to achieve the projected economic growth,” she said.

Other federal budget highlight include:

* The removal of time limits for Adult Migrant English Program (AMEP) clients aged under 18 years to seek an extension to their tuition entitlements.

* $3.6 million over four years will go to establishing an anti-slavery unit, within the Department of Home Affairs, to manage the implementation of a modern slavery reporting requirement.

* $5 million in 2018-2019 for community organisations assisting newly arrived migrants to integrate into Australian society through the Fostering Integration Grants Scheme.