US quits move to global compact on migration 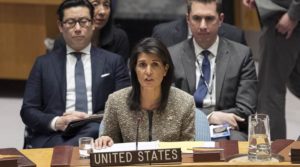 The United States has withdrawn from a bid to establish a ground-breaking voluntary pact to deal with migration on a global basis.

In a statement, the US’ mission to the UN said President Donald Trump made the decision.

“No country has done more than the United States, and our generosity will continue,” Ms Haley said.

“But our decisions on immigration policies must always be made by Americans and Americans alone.”

“We will decide how best to control our borders and who will be allowed to enter our country,” she said.

President Trump repeatedly pledged during his campaign and while in office that he would strengthen America’s borders and crack down on illegal immigration.

With a record 21.3 million refugees and 65 million displaced persons globally, the 193-member UN General Assembly last September adopted a political declaration in which they agreed to spend two years negotiating the pact on safe, orderly and regular migration.

Former US President Barack Obama backed the resolution, known as the New York Declaration, which also asked U. High Commissioner for Refugees Filippo Grandi to propose a global compact on refugees for adoption in 2018.

“The global approach in the New York Declaration is simply not compatible with U.S. sovereignty,” Haley said.

UN Secretary-General Antonio Guterres said he regretted the US decision but has expressed hope the United States might re-engage in the talks.

“The positive story of migration is clear: it needs to be better told. Equally, the challenges it throws up need to be tackled with more determination and greater international coordination,” Mr Guterres said through a spokesman.

Preparatory talks began in Mexico last week ahead of the start of formal negotiations in February over the non-binding pact.