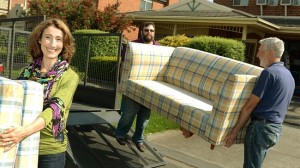 Refugees in Melbourne’s inner west have every reason to celebrate this holiday season. More than 320 asylum seeker households are receiving end-of-year food hampers, thanks to the generosity of local residents.

For the past year, not-for-profit organisation West Welcome Wagon has been collecting and delivering items such as clothing, furniture and white goods to asylum seekers in the western suburbs.

Founded by Yarraville local Mia McGregor the group operates via a Facebook page, which has amassed almost 3,500 members.

“I saw on Facebook that a friend had delivered some material aid to a local asylum seeker household and I was curious to see what an asylum seeker looked like,” said Ms McGregor.

When she discovered the family needed some bedding, Mrs McGregor gathered what she could and made her way to the dwelling. But when she arrived, no-one was home and she was shocked to find herself peering through a curtain-less window into a completely empty apartment. Ms McGregor was overcome by an overwhelming desire to help.

“[The family] had been there for weeks and had no electricity, no beds, no chairs,” she said.

Ms McGregor made a few enquiries but couldn’t find a local organisation that could provide the necessary aid.

“This can’t be allowed to happen. Someone should make sure they had the bare necessities but there was no-one,” she said.

“Then I shared my concerns with my Facebook community … and they were very keen to offer social support to asylum seekers.”

The group has evolved from providing material goods into offering social aid by linking long-term Australians with new arrivals.

But earlier this year West Welcome Wagon was itself on the receiving end of aid when their goods delivery trailer was stolen.

“The Department of Justice provided us with a wonderful trailer,” she said.

Thanks to the handy work of prisoners the organisation now has a bigger and improved version.

According to The Herald Sun inmates at Ravenhall’s Metropolitan Remand Centre built a caged trailer in their metal fabrication factory “as a way of giving something back to the community”.

Ms McGregor said the group urgently needed volunteers to drive their trailer and help with delivery of large items. She is also appealing to anyone with their own van, ute or trailer to assist.