Changing the lives of refugee women in Indonesia

Carly Copolov travelled to Indonesia on a research trip, but came home inspired to help make a difference to the lives of refugee women living there.

Now her not-for-profit social enterprise, Beyond the Fabric, is doing just that by giving these women a platform to sell beautiful handmade pants.

As a psychology PhD student, Ms Copolov studied the wellbeing of young Hazara adults with refugee backgrounds living in Australia. 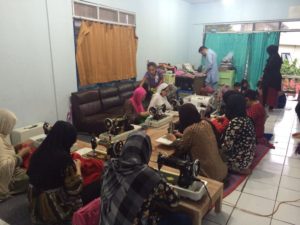 She had been told to visit the Refugee Women Support Group in Indonesia, as the Hazara community in Melbourne was impressed by their ability to make beautiful handcrafts as a way to keep themselves busy while waiting to hear about their refugee claims and resettlement options.

Ms Copolov came home with not only many of the women’s products, but an idea to help them sell their handicrafts online.

And so Beyond the Fabric was born.

As refugees are unable to work in Indonesia, Beyond the Fabric aims to restore a sense of purpose and dignity to refugee women who are living a vulnerable and precarious life in transit.

“We want to raise awareness of the plight of refugee women in Indonesia,” Ms Copolov said.

“Beyond the Fabric allows everyday Australians to show their support of refugees in Indonesia by wearing their new pants handmade by refugee women.”

And Australians have wasted no time doing that.

Since its launch in September 2016, Beyond the Fabric has sold 115 pairs of pants made by the refugee women living in ttransit in Cisarua, Indonesia.

Ms Copolov runs the business end of the website and talks to people about the inspiration behind the social enterprise, such as high school students in Melbourne.

Indonesia is one of the key transit countries in the Asia Pacific with recent UNHCR figures suggesting that the country is hosting 13,110 refugees.

Unable to work or be resettled there, Ms Copolov said refugees faced considerable hardship day-to-day, such as finding enough food to eat, finding affordable housing and finding a school which will educate their children.

“In particular, refugee women in Indonesia suffer from stress, financial problems and health problems due to sanitation issues with the local water,” she said. 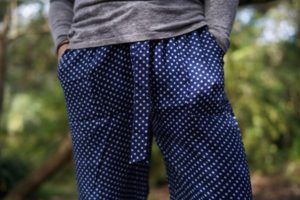 In collaboration with Refugee Women Support Group Indonesia, Beyond the Fabric is enabling these women to support their families by giving them a purpose and a platform to sell their beautiful handmade pants online.

A group of 20 strong-willed women and one talented tailor handpick fabrics from the local markets in Bogor and Jakarta in Indonesia, and create only a handful of each print of pants, some being one-offs.

They are sold from $25 with $12 of every pants sold in Australia given to the talented woman who created them (an amount decided by the women).

“Through this group they have become friends with each other and through these classes, women become aware about our different cultures,” she said.

“Thank you for buying our pants. It’s not just that we are selling and you are buying our handicraft. It’s your love and support towards refugees. It means you feel our pain and our problem. It gives us a purpose.”