Digital technology is delivering a revolution in education which its proponents say is removing the old barriers of geographic access and socio-economic circumstances while also changing the way humans behave creatively, a major conference has heard.

The recent EduTECH 2016 conference in Brisbane heard from a range of speakers at the cutting edge of digital service delivery in education and dozens of providers who showcased the latest digital learning software. 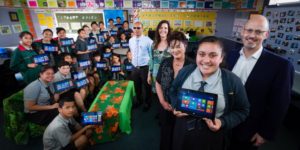 The conference – which attracted more than 8000 delegates and 200 speakers from schools, tertiary education, VET, and workplace learning institutions across the globe – is an annual event which focuses on the intersections between education and technology.

Google Education executive John Vamvakitis told the conference that the digital revolution was with us “whether we like it or not” and that digital technology was having a transformative effect in education.

“For most of history where you lived, your family’s circumstances and your access to resources and opportunity defined your education,” Mr Vamvakidis said.

“For Generation Z, technology is everywhere – there is a massive level of engagement. We are seeing the rise of the digital generation whether we like it or not.

“The world is evolving and we need to change with the times.”

He said there would be a shift in the types and terms of jobs into the future and there was a need for strategies around how to prepare students for this.

“The economy of the future will require three main types of skills into the future: problem solving, team work and communication,” Mr Vamvakitis said.

“Information is already ubiquitous but using information effectively is a skill that needs to be learned.”

Mr Vamvakitis said that in the future, diverse teams collaborating across time and cultural barriers would be how companies and organisations would be working.

“Already people are embracing the benefits of diversity in business,” he said.

A focus of the conference was the speed at which digital technology was being taken up. It heard that:

• Online revenues are forecast to increase by 8.6 per cent each year for the next five years.

• There are 340,000 years of video watched online every day amounting to 4 billion separate videos. Sixty-eight per cent of viewers share video.

Meanwhile, creative education consultant Hamish Curry told an education forum in Melbourne that technology could and should play an intrinsic role in education and learning and being literate in new technology would be vital in the jobs of the future.

Mr Curry said technology could help with learning through its capacity to find or identify problems, find patterns in data related to those problems and then solve the problem.

“Learning is culturally different almost everywhere and it is based on a range of different things,” he said.

“So, we need to ask ourselves and understand what our culture does to encourage learning.”

But he said people sometimes naively believed technology could solve all our problems when sometimes it raises other problems.

“This means we need to investigate prototype problem solving – which means that we need to commit to finding a solution and making things better even though there might be failures along way,” Mr Curry said.

He said that humanity had always envisioned a world where we are better connected.

“A precursor for all good technology and innovation is imagination and at school there is not always enough time for kids to use their imagination,” Mr Curry said.

Mr Curry said he believed education was something that was currently ‘done’ to people not ‘with’ them.

Mr Curry said for everyone, but particularly children, technology was now important in fostering imagination, communication, experimentation and exploration.

“Technology is now largely how kids do these things – it is one of the mixture of mediums we now have at our disposal in networking and in connecting with the world,” he said.

But, almost as a postscript, Mr Curry warned that technology tools were “very good at filling our time” – even if they were not solving a problem.

“Like everything else, the key is moderation. Technology is a fantastic learning and problem solving tool, but it’s not the only thing in life,” he said.

The Brisbane conference heard thinkers on digital technology had identified four waves of the digital revolution.

The first digital revolution was the advent of the internet and broadband, the second was mobile connectivity and portable access to the web. The third revolution in the digital space was the uptake of social media networks.

Now cyberspace pundits are talking about how the fourth digital revolution will be about the data generated by the digital world.

This is called ‘the internet of things’ and how all the data it creates will give a more detailed picture of what is happening in digital communities and media. It will expose the variety of media zones that people occupy, what they are talking about, their views and attitudes and some of the ways this can be measured.

“In some ways this is the most exciting phase because we don’t yet know exactly what it will do or where it will take us,” Mr Curry said.