Home » Lead story » Mums on a mission to help

Mums on a mission to help

On a weekday afternoon in a warehouse in the backstreets of St Kilda a sophisticated logistics operation is underway.

There are goods packaged according to use and customer profile, there are stock codes on every item in store and there are carefully arranged dispatch schedules. 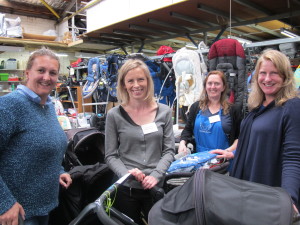 A purpose built app keeps track of what material goes where and to whom while collecting data on customers and delivery agents.

But this is not the transport hub of a national retail giant distributing expensive, fast moving consumer goods that most of us could easily live without.

This is the home of St Kilda Mums, a not-or-profit group run largely by volunteers which donates to disadvantaged families prams, cots, car seats and just about everything else needed to care for young children.

St Kilda Mums has been operating for six and half years; initially from the verandah at co-founder Jessica Macpherson’s suburban home and then at a donated garage in Elwood.

“We started out helping one maternal health nurse trying to repurpose some of the things we had -so it was a tiny grass roots thing,” Jessica says.

In 2012 the group moved into a medium-sized warehouse in St Kilda; the space is organised with military precision with separate areas for each type and material and a large table used for sorting and bundling clothes and bedding.

This year St Kilda Mums helped 6243 disadvantaged families. More than 24,000 items were given out amounting to $1.7 million worth of material aid, using second hand valuations.

The organisation supplies 280 social service organisations and local councils and has more than doubled its reach and impact each year of its existence.

All of the clothing, blankets, toys and other items are sorted into gender-specific packs, while prams, cots and car seats are washed, repaired and safety-checked.

“Our model is based around working with social workers who come and pick up goods they need for their clients,” Jessica says.

“A social worker will call us and request some items. We package them up and have them ready and waiting for pick-up; that way no one wastes a journey and we can turn around the pick-ups very quickly.”

Run by a board of five mothers and a growing team of volunteers, St Kilda Mums has helped disadvantaged Melbourne families, from refugees and asylum seekers to women escaping violence and those simply unable to afford the baby basics.

“We concentrate on collecting stuff that will prepare a family to welcome a newborn baby home from hospital,” Jessica says.

“You may be only donating some clothing or a baby bath, but when that’s put together with 10 or 20 other people’s donations, suddenly you have everything that a new mum needs.”

With charities not accepting prams, car seats, cots or other nursery equipment due to safety concerns, the women realised there was no place for people wanting to donate nursery gear.

“So we stepped in to fill the gap,” Jessica says.

It is obvious listening to Jess and her volunteers that St Kilda Mums is much more than just a logistics operation.

There is an obvious bond between the women – mostly mums themselves – and the people who donate pre-loved baby goods.

“I think we’ve tapped into something very strong. A lot of the clothes we receive have special memories attached to them for the donors – so it’s beautiful they are able to give it to someone else who needs it and will really appreciate it,” Jessica says.

“We take a lot of pride in putting the clothing bags together with beautiful things, everything a mum would need from birth to about one year. We want the mums opening up those bags to feel that they are getting a gift of good quality stuff.”

St Kilda Mums also harnesses the power of social networking, using Facebook to mobilise and communicate with thousands of supporters. Much of its communication is done online, with people responding to posts requesting anything from working-bee helpers or specific clothing to the rescue of a discarded pram spotted on a suburban street.

And this week the group won the state’s top honour in the Victorian Premier’s Sustainability Awards – the Premier’s Recognition Award – for its work in recycling, reusing and re-homing baby’s and children’s gear.

She says in her experience homelessness and family violence seem to be increasing issues in families with young children getting into difficulties.

“We all know it can be an intense time when you bring home a newborn baby but is even more difficult to cope when you have no family support and a lack of material resources,” she says.

Standing in a sea of strollers and against a backdrop of bundled up clothes and toys, Jessica tells her ‘half-pram story’.

“It’s amazing the number times someone will donate half a pram – which is obviously useless. But then someone else will quite coincidentally and separately donate the other half of the same type of pram – and we put them together and we have a pram to give someone.

“These things just shouldn’t happen but they do and what that tells me is that we are doing something good and right,” she says.

To volunteer or donate to St Kilda Mums go to: www.stkildamums.org