Home » Latest Articles » 70 years of the Snowy – a multicultural memoir

70 years of the Snowy – a multicultural memoir

A new book tells the story of the children who grew up on the Snowy River Scheme living in small towns in rugged alpine bushland where 70 per cent of people were migrants.

‘Snowy Kids’ by Graeme Ford (and others) recounts how thousands of children grew up in the towns that were created to house the workers of what was, at the time, the world’s largest engineering project. 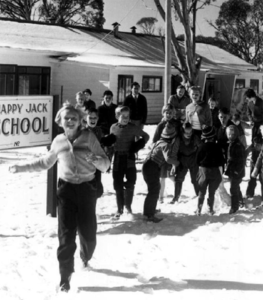 At any given time up to 7000 people were working on the Snowy Mountains Hydro Scheme. Commenced in October 1949 – 70 years ago this month – the project saw 16 dams, seven power stations, a pumping station, 145km of tunnels and 80km of aqueducts built to harness the flow of the Snowy River for hydro-electric power and for irrigation.

One of the most important moments in Australia history, the launch of the project had been years in the planning and ultimately attracted about 100,000 workers, 70 per cent of whom were migrants, to work on it during its construction between 1949 and 1974.

Mr Ford was the son of road building engineer Stan who had worked on building strategic roads in the Northern Territory during World War II.

In the early 1950s Stan was working in Lismore and heard about the Snowy scheme.

“He drove down with a friend and ended up getting a job immediately,” Graeme said.

Stan later sent for his family to join him. They travelled to the mountains by train in 1956 and like many other families were picked up by a fleet of buses and jeeps ferrying new arrivals to the towns.

There was barracks-style accommodation set up for single but there were also towns built for families.

“My mother cried on the train on the way down,” Graeme said.

“But far from the bush cabin she was expecting, everything was new and modern. Our house had double-glazed windows, insulation and everything was very advanced, cutting edge,” he said.

While the early workers had lived in tents, by the 1950s life was more comfortable.

Graeme says his mother was greeted warmly and made to feel at home by a German woman who lived across the road.

“She hardly spoke any English, but she struck a friendship with my mother,” he said.

The Fords moved from town to town as the work progressed from higher up in the mountains down to the lower slopes.

“Wherever we went we mixed with people who came from dozens of different nations,” Graeme said.

The Department of Education established schools wherever there were children.

“We had a really interesting teacher, Gus Plater. It was his first year out and he was just brilliant,” Graeme said.

“The teachers in the Snowy project towns had to be inventive and also make their lessons work with students who barely knew any English. So, we were completely integrated,” Graeme said

He said many people forget that there were also a significant number of Americans working on the scheme.

“The Americans wore different clothes and had all kinds of accoutrements in their homes. It was like a taste of what the future was like,” Graeme said.

When they weren’t in school the children explored the rugged environment.

“We were right in the bush. All the kids knew the bush like the back of our hands. We developed a real love of the land,” he said.

“In those days, the mountains were under snow for five months of the year and many people from Europe went skiing. We had sleds made by our fathers in the workshop from bits of pipes,” he said.