Home » Latest Articles » A decade of devastation – the Syrian tragedy

A decade of devastation – the Syrian tragedy

Ten years ago this month protestors calling for political change took to the streets of Syria in what were mostly peaceful demonstrations of collective will.

They had seen the movements in other Arab countries, which forced a few long-ruling autocrats to give up their often brutal grips on power; and these mostly young Syrians hoped that change and democracy might come to their country – which had suffered under the rule of President Bashar al-Assad and his family for decades. 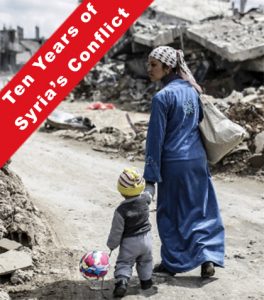 Instead there has been only chaos, conflict and finally ruin

A decade after the start of the conflict in Syria, reports are still flowing on the continued plight of around 5.5 million Syrian refugees and the 6.7 million people internally displaced.

In Lebanon, about 1.7 million Syrian refugees have been among the hardest hit by the country’s economic collapse, with 89 per cent living below the poverty line in 2020, according to the United Nations.

UN High Commissioner for Refugees Filippo Grandi says ‘the world has failed Syrians’, and called for renewed efforts from the international community to support refugees and host communities.

But the Syrian conflict as a civil war is pretty much over. Government forces now control more than 70 per cent of the country and all its major cities.

The rebel groups are clinging on to shrinking strongholds, mostly in the country’s north and west; and only thanks to Turkish protection.

In the northeast, Kurdish-dominated militias that once fought alongside a US-led coalition dismantled by President Trump now find themselves fighting both the Assad regime as well as Turkey and its proxies

Iran and Russia’s entry into the conflict secured Assad’s domination and his forces targeted civilian population centres with artillery and crude improvised devices like barrel bombs.

It also deployed chemical weapons, according to the UN, as semi-complicit Western powers focused their efforts on combating Islamic State.

The past decade has left Syria and its people shattered and scattered.

More than half of the population was forced to flee. Six million Syrians fled their homeland, escaping across its borders into neighbouring countries.

A million took to small unseaworthy boats to try to cross the Mediterranean to Europe and quietly within Syria, tens of thousands who had challenged Assad were arrested.

Syrian migrants have largely been able to settle and integrate well in Australia and other countries.

But millions still languish in limbo in countries bordering Syria, living even more precariously because of the COVID-19 pandemic and too afraid to return home fearing the wrath of the regime.

And conditions are only getting worse.

“Poverty and food insecurity are on the rise, school enrolment and access to health care are shrinking, and the COVID-19 pandemic has wiped out much of the informal work that refugees rely on,” a UNHCR report concluded recently.

A durable solution appears not to be in sight.

Western governments have placed tough sanctions on the Syrian regime, but that has not loosened Assad’s grip on power and has arguably added to the privations of ordinary Syrians.

One great tragedy of all this is that most Syrians are not overtly political. They were happy to tolerate the Assad regime as long as they were able to live relatively affluent lives enjoying their country’s rich culture history and food.

Syrian community leader Antoun Jbreeta says that what has happened in Syria is a tragedy.

“Syria was a beautiful country. The country’s art, culture and traditions as well as its music, monuments and treasures have always been important to Syrians,” Mr Jbreeta said.

“Syrians have a great love for their country, a deep affection that indicates their links to the land and its history,” he said.

“Damascus and Aleppo, the two oldest continuously inhabited cities in the world, are in Syria. People, wherever they are in the world, feel connected to this ancient land.

“What has happened in our country is tragic but we hope that the country can rebuild itself,” Mr Jbreeta said.

A decade after protesters took to the streets to oppose the Assad family’s rule, President Bashar al-Assad has retaken control of most of the country.

But for most Syrians, at home and abroad, the prospect of returning to a normal life in their homeland seems a dim prospect.