The City of Adelaide is considering establishing a ‘Multicultural Hub’ to promote diversity and social inclusion as South Australia embarks on a significant and economically-driven campaign to attract more new migrants and international students.

Its proponents say the hub will help to connect communities and give newly arrived migrants and refugees a focal point for social, educational and cultural activities. 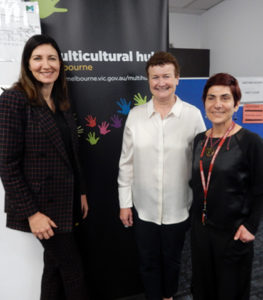 Under the model being considered, it would be a place where people from Adelaide’s many different cultures can meet, work, share and learn in a safe and supportive environment.

One of the leading advocates of the hub is Adelaide North Ward Councillor Mary Couros.

Cr Couros says she is passionate about the project partly because of her background as the daughter of migrants but also because of the economic benefits migration, and especially skilled migration, is bringing to South Australia.

“There is definitely an economic argument in supporting migrants to settle quickly and find a sense of belonging and contribute to the economic and cultural life of Adelaide and South Australia,” Cr Couros said.

“But there is also the idea that we are a welcoming city that has always accepted people from around the globe; and a ‘Multicultural Hub’ would be a practical embodiment of that welcome,” she said.

Cr Couros says that as a child of migrants, she understands the issues and barriers newcomers to Australia face.

“My parents migrated from Greece in the 1960s. They came separately and met in Adelaide,” she said.

“It’s a typical story of migrants in the 1960s. They were not really supported by the government of Australia but the government did open the gates to allow migrant to come here,” Cr Couros said.

“They worked very hard to build a life for themselves and their family. Dad worked for Holden and Mum worked at a glove and protective clothing manufacturing factory called A.S. Horne in Prospect. Neither of these places is still there.

“But Adelaide was a very happening city in the 60s, including for migrants. There was a lot of low-skilled factory work and the Dunstan government was open to migrants coming to South Australia. Don Dunstan was very forward thinking.

“Economically, South Australia was booming in the 1960 and factory work was plentiful and my parents were able to provide for the family.

“Migrants like my parents worked hard but they had virtually no language; they relied heavily on the community to feel a connection to the homeland and to fulfil the need to speak, communicate and socialise.

“My parents were part of communities that put their money together and build churches and community infrastructure,” Cr Couros said.

“But growing up as a child of migrants felt like living in a double world. We were living in Australia but at home is was all Greece,” Cr Couros said.

“Like a lot of migrants, my parents had a garden and grew their own produce: tomatoes, cucumbers, lemons, olives… and we had our own chickens and eggs.

“They came from a war-torn country and it was instinctive to them to grow season produce for themselves,” Cr Couros said.

She said that coming to a new country could have subtle impacts on the children of new migrants.

And for the young daughter of migrants from Greece, it was not all plain sailing.

“I went to school with tomato and feta sandwiches. Everyone else had cheese and vegemite, so I was considered weird,” Cr Couros said.

“It was hard to adapt as a child living between the two worlds. It left a bit of mark. We had to grow up quickly. We became translators for our parents – at the supermarket and at parent-teacher meetings.

“We would read official letters and explain what they meant; we became adults from a very young age.

“But in hindsight, it was a great experience. It taught us independence and resilience.

“This is why I’m advocating for a multicultural hub in Adelaide – to help people who are new to the city build their own communities as well as become part of the broader community.

“When you know little about your new surroundings, it’s important to have someone to guide you through what is a very complicated society,” she said.

“The Italian and Greek communities have grown up but we haven’t forgotten what it’s like to be different.

“There was a lot of racism back when I was a child. I don’t see it now but I’m sure it’s out there. So support for newcomers is so important.

“We are a migrant nation and there are services for people but I’m talking about people building their own connections.

“There are so many issues related to settling in a new country – health, mental health, employment, a sense of belonging. All of these feed into our overall social cohesion and that’s why a multicultural hub is so important for Adelaide and South Australia,” Cr Couros said.

The proposal for a ‘Multicultural Hub’ is currently being considered Adelaide City councillors.