From October, the African Union (AU) – a continental forum of 55 states – wants the new African Humanitarian Agency (AfHA) ton replace the current leadership provided by UN agencies and other organisations. 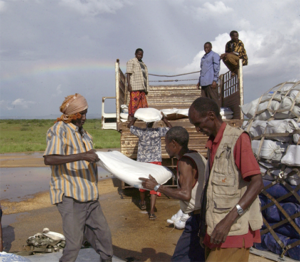 African commentators and scholars have long held that UN agencies and international NGOs in Africa are extensions of a neo-colonial international system, limiting African institutions from evolving.

Its creators aim for the AfHA to provide the general policy direction for the African-led humanitarian system, strengthen the disaster management bodies of member states and create sub-regional hubs for training and funds mobilisation.

“Where member states are parties to a conflict and are unwilling or unable to protect or assist civilians, AfHA will deploy non-combatant contingents from the African Standby Force on neutral missions to keep humanitarian space open and safe for African NGOs,” it says.

But other pundits point out the new body will face three tough challenges: accessing sufficient resources, defining a clear division of labour with existing organisations, and ensuring international aid agencies step back.

The move is backed by all 55 AU members as a priority reform. But success or failure will also be the ultimate test of the commitment to the localisation agenda of the existing main operators in the humanitarian system.

Member states have reportedly agreed to increase the organisation’s annual budget for humanitarian coordination from the current $US2 million to $US20 million.

But the first challenge facing the fledgling organisation is the need to provide sufficient resources in terms of funding, logistics, and staffing; creating the capacity to manage disasters and crises of conflict in Africa by the 2025 deadline to replace UN and international NGOs.

The second challenge is one of coordination. There are a plethora of national bodies, member states, sub-regional organisations and existing local NGOs.

At the same time, many nations are strengthening their own domestic disaster response arrangements and sub-regional organisations have created their own humanitarian policies and networks of partners.

Observers say without a proper coordination mechanism, these may become competitors instead of partners to AfHA.

A third challenge may come from UN agencies and foreign humanitarian groups that now control most aid on the continent.

The UN and the International Committee of the Red Cross have so far provided technical support for the work of creating the AfHA.

The idea is that once AfHA is adequately funded, equipped and coordinated, the UN and international NGOs will take a step back.

But humanitarian organisations have long competed for growth, funding and brand visibility. So, the UN agencies and foreign NGOs may ultimately consider AfHA as a competitor rather than a partner.

Time will tell whether AfHA will go the same way as other grand ideas like the African Food Relief Organisation of the 1980s and the African Humanitarian Initiative that the AU’s predecessor, the Organisation of African Unity, abandoned in the 2000s.