Africa, the economic ground zero of the COVID-19 crisis?

Many African countries moved rapidly to curb the initial spread of coronavirus, but they have been slower to cushion their citizens from its economic impact, according to a raft of new reports.

The African Centres for Disease Control and Prevention began increasing their testing capacity in February, and by March many countries required foreign travellers to self-quarantine upon arrival. 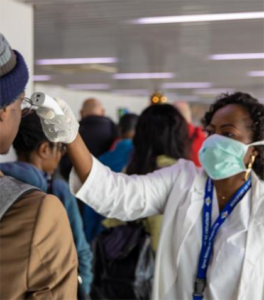 When local cases did begin springing up, countries across Africa responded within days to close their borders and to order curfews and lockdowns to prevent the virus from spreading.

The problem though, is that most Africans work in the informal economy and rely on day-to-day income. The reduction in working hours and restrictions on movement has, according to the think tank the Brookings Institution, seen 41 per cent of people who already live below the $US2 a day poverty line fall into even more parlous circumstances.

After weeks of stay-at-home orders, some governments have begun to tentatively ease restrictions.

Economic relief would help ease the pressure on workers and families struggling with the impact of lockdowns but governments – though recognising that hunger is also a threat to public health – have moved slowly to put social protection programs in place.

The two waves of economic relief were, firstly, cuts in the fees and taxes citizens must pay to the government or to banks.

The second wave of relief is now underway and involves direct support to poor people who might otherwise go hungry.

Rwanda and Uganda have begun providing people in their capital cities with food aid. Kenya and Malawi have started cash transfers, and South Africa has upped payments to current welfare beneficiaries.

Other countries such as Botswana, Ghana and Guinea have announced plans for direct food relief.

But some critics say middle class Africans have benefitted from the programs at the expense of the poor.

Countries that moved relatively quickly on economic relief mostly already had welfare programs in place. These are primarily aimed at alleviating rural poverty, while the impact of coronavirus is being felt most heavily in cities.

Observers say that in, the case of coronavirus response, it seems that logistics, as well as politics, is playing an important role.

There are two logistical challenges. The first is the informal nature of most African economies. According the International Labour Organisation across Africa 85 per cent of people don’t have access to formal employment, 66 per cent don’t have bank accounts, and 41 per cent don’t have national IDs.

Many African governments are trying to support their poorest and most vulnerable. But without employers, banks, or ID systems to share contact information, it’s difficult for governments to determine where citizens live and which of them need assistance.

A second logistical challenge is funding. Because African governments are financially challenged, it’s easier for them to cut revenues – in the form of tax and utility price cuts – than to increase spending: in the form of direct aid to the poor.

But cutting tax revenues means that governments have even less money to distribute to the poor.

Most African countries will require financial support from the international community in order to scale up their pro-poor economic relief efforts.

The World Bank and the International Monetary Fund have taken some steps towards this goal by forgiving debt payments for the poorest countries for the next six months, and providing lines of credit to other countries.

But the problem is that much of the new credit is meant to support the health sector and the formal financial sector. However, more spending targeted towards vulnerable people in the informal sector could reduce the risk that the pandemic will push millions more back into poverty.