The fighting and resultant humanitarian crises in the troubled African regions of Tigray, in Ethiopia, and the Beni and North Kivu regions of the Democratic Republic of Congo (DRC), are intensifying with reports of rape and rising civilian deaths.

This week the Ethiopian government issued an ultimatum to Tigrayan forces to surrender within a week or it will use “all measures necessary” to end the fighting. 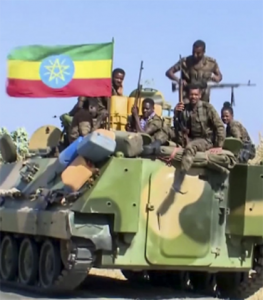 “With the exception of senior TPLF military and political leaders who are suspected of being involved in the illegal attacks and related crimes and against whom arrest warrants has been issued, other citizens and natives of the region are called upon to return to their villages and homes within a week and join the community,” Ethiopian Prime Minister Abiy Ahmed’s office said in a statement Friday.

While Abiy declared victory on November 28, fighting has persisted and the United Nations has warned of a growing risk of starvation in the area.

So far, the conflict has killed thousands of people and forced hundreds of thousands to flee their homes.

Recent media reports have carried allegations of Ethiopian and Eritrean soldiers in the region using rape as a ‘weapon of war’, with women in refugee camps reporting being raped as they fled the fighting.

Meanwhile, the US has dispatched Senator Chris Coons to Ethiopia to meet with Prime Minister Abiy and convey Biden’s “grave concerns” over the humanitarian crisis in the region.

President Biden has promised US$52 million more aid, calling for a political solution to end the hostilities which ‘threaten the peace and stability’ of the region.

The conflict in Tigray has increased tensions between Ethiopia and Sudan, sparking fears of a an wider regional conflict, with more than a dozen civilians killed and 2,000 displaced in clashes over deployments of Ethiopian forces in disputed border areas.

In the DRC, an increase in armed attacks on civilians has left 200 dead and more than 40,000 people displaced since January, according to UNHCR.

The attacks on villages in the Beni Territory in North Kivu province and the neighbouring Ituri province are attributed to the Allied Democratic Forces (ADF) group.

UNHCR has launched an appeal for US$1.2 billion in 2021 to fund humanitarian support for more than 2.2 million South Sudanese refugees in the DRC, Ethiopia, Kenya, Sudan, and Uganda.

The refugee agency says more than 65 per cent of the refugees are children and include around 66,000 younger children separated from their parents.

The UN also announced the South Sudan Humanitarian Response Plan for 2021, which needs US$1.7 million to assist 6.6 million people, including 350,000 refugees, affected by the combined effects of conflict, the COVID-19 pandemic, climate change, and locust plagues.