Australia’s tough stance on immigration has helped keep down the vote for far-right political parties, the country’s ambassador to France has told cable news channel Euronews.

Ambassador Brendan Berne said Australia’s policy on migrants had been a success but refused to be drawn on whether the EU should follow suit. 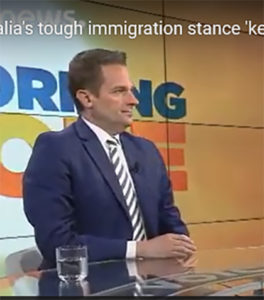 Under Australia’s immigration policy, would-be asylum-seekers intercepted at sea while trying to reach Australia are returned to the boat’s country of origin.

Asylum-seekers who reach Australia are sent to Australian-run detention camps in Papua New Guinea and the South Pacific island of Nauru, where they are held in conditions widely criticised by organisations such as the United Nations.

“It was important to us that our immigration policy was not left to criminal organisations that were putting lives at risk,” Ambassador Berne told Good Morning Europe.

“What we’ve managed to do is keep a licence for a generous immigration program and kept the far-right vote in Australia to a lower level: 4 per cent in the last federal election and compared to many other countries that’s a minuscule amount,” he said.

The interview came after at least 13 people died when a crowded migrant boat capsized off the coast of Lampedusa, local authorities said on Monday.

The UNHCR says more than 1,000 people had died in the Mediterranean this year as they tried to cross mostly from lawless Libya.

“These are distressing scenes, but they are questions for our European friends,” Mr Berne said, when asked whether the EU should adopt a similar immigration stance to Canberra.

“Australia came to its policy after trying different approaches and we feel that we have reached the right position,” he said.

In a wide-ranging interview, Berne also discussed the possibility of an Australia-EU trade deal and the impact of Brexit.