Most Australian voters still believe immigration makes the nation a better place and provides an economic boost, a new poll has found.

The Essential Media poll, conducted last week, found 51 per cent of respondents thought immigration was “generally positive” for the country, 35 per cent believed it was “generally negative” and 14 per cent were unsure.

The most common reason respondents gave for supporting immigration was “it creates economic growth”.

While the top reason people gave for opposing immigration was “new immigrants often fail to assimilate with the rest of the population”.

Throughout the federal election campaign, the Coalition has conflated immigration numbers with congestion in Australia’s urban cities like Sydney and Melbourne.

But the poll suggested this is not gaining traction. Only 13 per cent of people said they opposed immigration due to overcrowding.

The poll was conducted online from 24 April to 29 April and is based on 1,010 respondents.

With the justification of “congestion-busting”, the government announced in March a reduction to the cap on permanent migration from 190,000 to 160,000.

And Prime Minister Scott Morrison also has said the Coalition will freeze Australia’s annual refugee intake at to 18,7 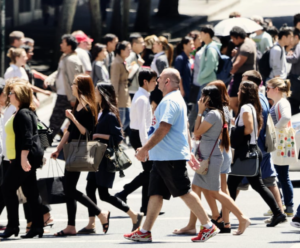 50 for the next three years.

“It’s putting a lot of pressure on people, particularly in the outer suburbs and we need to invest in the infrastructure and let the population growth get under control so we can catch up a bit,” he said.