Mayerlín Vergara Pérez is an activist, campaigner and the Caribbean Regional Coordinator for the Renacer Foundation, a non-governmental organisation in Colombia that has been working for decades to eradicate the sexual exploitation of children and adolescents, many of whom are refugees. 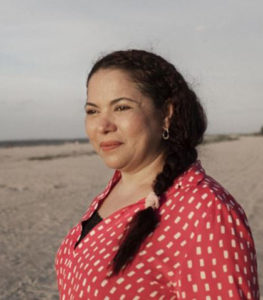 She lives and works in Riohacha, on Colombia’s northeastern border with Venezuela, where she runs a rehabilitation centre for dozens of child and teen survivors of sexual violence, trafficking and exploitation. The area has seen a spike in the sexual exploitation of young people including refugees and migrants fleeing the ongoing political, human rights and socio-economic crisis in Venezuela.

Among the four Nansen Regional Award winners are: a refugee school teacher striving to empower rape survivors; a scientist working to make reading and learning accessible to refugee children; an activist fighting to protect the rights of displaced people with disabilities, and; an aspiring refugee footballer using sport to get refugee children off the streets and into the classroom.

The winner for Africa is Sabuni Francoise Chikunda, a refugee school teacher from the Democratic Republic of the Congo living in Uganda. She is the founder and chair of The Women’s Centre helping victims and survivors of Sexual and Gender Based Violence.

The winner for Asia is Rozma Ghafouri, an Afghan refugee living in Iran is the co-founder of the Youth Initiative Fund project, a community-based initiative which seeks to get refugee children in Iran off the streets and into education.

The winner for Europe is Tetiana Barantsova, from Ukraine is a human rights activist and the co-founder of Luhansk oblast NGO “AMI-Skhid” (Association of Women, Youth, Families with Disabilities of Eastern Donbas), an NGO which advocates for change and protection of the rights of people with disabilities.

The winner for the Middle East: Dr is Rana Dajani, from Jordan, is a scientist and professor of molecular cell biology founded the We Love Reading project. The initiative aims to make books and reading accessible to children in every community including refugee camps.

The UNHCR Nansen Refugee Award honours individuals, groups and organizations who go above and beyond the call of duty to protect refugees, displaced and stateless people.

Established in 1954, the Award celebrates the legacy of Fridtjof Nansen, a Norwegian scientist, polar explorer, diplomat and first High Commissioner for Refugees for the League of Nations.

The first Nansen Refugee Award recipient was Eleanor Roosevelt, first Chair of the UN Human Rights Commission and First Lady of the United States alongside President Franklin D. Roosevelt. Over the years, more than 60 individuals, groups or organizations have received the award for their extraordinary service to refugees and outstanding work on behalf of the displaced.

Winners receive $US150,000, generously donated by the governments of Switzerland and Norway, to pursue a project to assist displaced people, developed in close consultation with the UNHCR.