Street artist and political activist Banksy has funded a rescue boat to save refugees getting into trouble trying to cross the Mediterranean Sea.

The boat, named the Louise Michel, was bought with proceeds from the sale of some of the UK-based artist’s works. 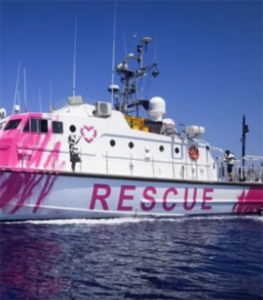 It has already carried out a number of rescue missions, taking on board 89 people from a rubber boat recently, according to the boat’s twitter account.

The vessel features a painting depicting a young girl holding on to a heart-shaped safety float.

Banksy repainted the former French Navy boat in distinctive white and pink and launched it under its new name last month.

The Louise Michel is named after a 19th Century French anarchist and is captained by a professional crew with a “flat hierarchy and a vegan diet”.

The vessel’s mission statement is to uphold maritime law and rescue anyone in peril without prejudice.

“We on board the Louise Michel believe we are all individuals, nationality should not make a difference to what rights one has and how we treat each other,” the boat’s website says.

“We answer the SOS call of all those in distress, not just to save their souls – but our own,” says

According to UN data, 443 people have died or gone missing attempting to cross the Mediterranean from North Africa so far in 2020.

Just over 40,000 have arrived in Europe by sea during the same period.

Banksy is a famous but anonymous – British graffiti artist. He keeps his identity a secret.

Although a lot of his art is produced in public places, he usually only reveals it’s his after it has appeared on his social media.

A lot of his art is done in a particular style which people can easily recognise and is known for delivering political messages.

In December 2019, he raised the issue of homelessness with a mural showing two reindeer that appear to be pulling a sleigh, but which is in fact a bench with a homeless man lying on it.

A 2018 piece in Port Talbot, in Wales, shows a boy catching what appears to be snowflakes but is in fact ash from a fire.