James Houston was present at the birth of Australia’s multiculturalism.

In 1969, the then Liberal Government asked Jim, then a senior public servant, to find out how many ethnic organisations there were in Australia.

His answer, after a few months research, was more than a thousand. And the rest, as they say, is history. 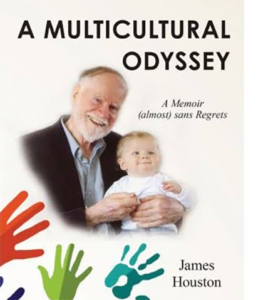 It is the story of the part one man played in the origins, development and general acceptance of Australia’s policy of Multiculturalism.

Mr Houston traces his role in Multiculturalism’s earliest formulation. In 1973, strategically located in the Immigration Department – and contrary to the views of its officials – he distilled his vision for Australia’s future into a speech written for Al Grassby, Minister for Immigration in the Whitlam Government. He drew on the convictions of some visionary academics and Melbourne migrant activists, as well as his own four-year Australia-wide field research with ethnic community leaders.

Following the Dismissal, in the face of the Fraser Government’s disinterest and grudging funding, he recounts the heroic seven-year struggle by the puny Office of Community Relations to implement the new Racial Discrimination Act. Houston’s ‘simple’ role was to reshape community attitudes towards the discrimination experienced by Aborigines and migrants! In the process, his Christian convictions about social justice would be sharpened.

Always a keen observer of Australian society, Mr Houston’s book conjures up memories of a simpler time while also providing insight into the current direction of Australian polity and society.

A part of the education system in his early working years, Mr Houston’s language skills led to teaching stints in England and Germany.

Eventually, he returned to Australia and took a public service role in education. This led to a move into immigration; the most politically and socially interesting part of his story.

Mr Houston describes the heady optimism of the Whitlam years and the development of his own role as a speechwriter.

It was in this role that he wrote the pivotal speech defining Multiculturalism delivered by Al Grassby in Melbourne in August 1973.

The speech laid out a blueprint for a multicultural Australia.

It has been described later as the first “official exposition of policy for promoting a multicultural Australia”.

It revealed plans for ethnic groups to be “permitted to create their own commercial life and preserve their cultural heritage indefinitely while taking part in the general life of the nation”.

Grassby’s speech described the concept as the “family of the nation” and that two committees of the Immigration Advisory Council would be established to lay the philosophical foundations for the new policy.

Mr Houston was ideally situated to pen it, having travelled the country interviewing thousands of leaders of migrant organisations and churches in his department’s National Groups Survey.

The survey was aimed at better understanding the migrant experience. This came amid a policy shift from ‘assimilation’ and a search for a policy more respectful of the cultural attributes migrants brought with them to Australia.

The book also described Mr Houston’s encounters with aboriginal communities on his travels to Ceduna, Yalata mission and other rural areas to bring news of the Racial Discrimination Act and its implications to remoter regions of Australia.

At the end of all of this, Mr Houston found a calling from the Anglican Church.

In Bishop David Penman he found a partner in the passionate advocacy for multiculturalism – properly and compassionately understood.

Mr Houston was ordained and took on the ministry at the parish of Dallas, in Melbourne’s north, described by Penman as “the worst in the diocese”.

With creativity and forbearance Mr Houston and his wife Marjorie, grew an insular and aging parish into a thriving community hub and haven for people of widely divergent cultures and socio-economic circumstances.

The book is beautifully written and in broad scope provides a history of the major political and social issues of the last 50 years from an insider’s perspective.