Migrants are keeping Australia’s cemeteries alive as more Anglo-Australians are opting to be cremated, according to new research.

A group of researchers from Monash University surveyed people about their visits to, or links with, cemeteries. 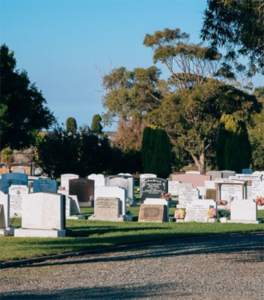 In-depth interviews with members of different communities found that cemeteries have ongoing significance to Australians, although their meaning and function are changing.

Researcher Dr Helen Forbes-Mewett said more than half of the 380 survey respondents said they still visit a cemetery once a year or more, and 23 per cent visit once a month or more.

But she said the interview data revealed a more complex and dynamic picture.

“We found people from culturally and linguistically diverse (CALD) communities tend to visit the cemetery more than their Anglo counterparts and preferred to be memorialised in cemeteries to preserve a sense of belonging,” she said.

“Anglo-Australians, on the other hand, generally prefer to be cremated and often choose to scatter ashes in places other than a cemetery. In one participant’s case, that meant scattering remains in a French vineyard, an island volcano and their local beach,” Dr Forbes-Mewett said.

She said the cemetery remained an important site of cultural ritualisation and expression to most CALD interviewees.

Interviewees from the CALD communities – especially those from an Asian cultural background – had positive experiences with cemeteries in Australia, the researchers said.

The perceptions that Australian cemeteries are more open, greener, better managed, more accessible, and not as scary as those in their original countries made many Asian migrants felt more willing to visit a cemetery here, they said.

Besides the aesthetic contrast, for many CALD interviewees, the cemetery offers a space that embraces their culture and gives them a sense of belonging in Australia, the study found.

On the other hand, people from an Anglo-cultural background no longer see cemeteries as just a space for memorialisation and mourning,” Dr Forbes-Mewett said.

“From our interviews, many see it as a ‘library’ or a ‘depository’ of the local history and family genealogy,” she said.

“Cemetery visits, in this sense, contrast between fulfilling one’s cultural duty of memorialisation, and obtaining historical knowledge for self-learning, reflection, and development.”

The study found more people have started pre-planning what happens to their body when they die.

The researchers’ data shows 64 per cent of people have already discussed their end of life-related wishes with close friends or family, and 11 per cent have pre-paid for a funeral service.

An earlier study, found Chinese Australians tended to pre-purchase their funeral services and grave sites before they died.

“This might enhance their sense of cultural belonging in Australia,” the researchers said.

“On the other hand, people from an Anglo cultural background would ‘talk about it’, but few actually ‘lock things in’,” they said.

“Interviews from the present study revealed people with an Anglo cultural background had a strong desire of ‘flexibility’. Many didn’t wish to decide at the time of their interview, as they were still exploring possibilities and opportunities outside the conventional modes of body disposal and memorialisation.

“In other words, the idea of being memorialised outside the cemetery was an emerging rather than established idea,” the researchers said.