Major global corporations have led the way in pledging to help refugees get access to education and employment at a global conference aimed at supporting the millions of people forced from their homelands.

Companies including Ikea, Lego and Vodafone pledged $US250 million toward education and training in jobs and entrepreneurship to aid refugees in becoming more self-sufficient, the United Nations refugee agency (UNHCR) said in a statement. 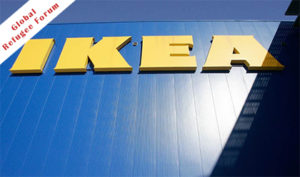 The pledges came at the Global Refugee Forum being hosted by the UNHCR in Geneva.

Swedish furniture retailer Ikea said it would support 2,500 refugees through job training and language skills in 30 countries by 2022, backed by a five-year commitment of 100 million euros ($US111.5 million)

Vodafone said it would expand a digital education program that brings online teaching tools into refugee camps in east Africa.

The program, run by the Vodafone Foundation, provides a digital “school in a box” that includes a laptop for the teacher, tablets for pupils with built-in recharging mechanisms, speaker and projector, all using 3G connectivity.

It exists in eight refugee camps in Kenya, Tanzania, the Democratic Republic of Congo and South Sudan and is being expanded to reach 500,000 young refugees by 2025.

Toymaker Lego pledged $US100 million toward play-based learning tools for children displaced by crises in Africa in cooperation with the International Rescue Committee, a US-based charity.

The pushed was supported actors Cate Blanchett and Ben Stiller, who appeared in a social media campaign that highlighted stories of successful refugees.

Getting refugees into work or further education was a key focus of the refugee summit.

The summit heard refugees spend an average of 17 years in exile before either returning to their country of origin or being permanently resettled. Just over 92,000 of the world’s 25.9 million refugees were resettled last year.

Meanwhile, in Australia, the federal government is revamping its resettlement services with a push to send more to people to Australia’s regional areas.

In November, it upped its target of regional settlement to 50 per cent of humanitarian entrants and introduced a new position of Coordinator-General for Migrant Services.

But the government has refused calls to increase the cap on humanitarian entrants which was frozen this year at 18,750.

Last week, Labor backbencher Peter Khalil urged Australia to play a leading role at the Global Refugee Summit and broker a deal with multiple countries willing to lift their intake by hundreds of thousands of refugees.

A federal government spokesperson said Australia had one of the most “substantial refugee and humanitarian programs in the world”.

“On a per-capita basis, our program is matched by very few other nations.

“Our refugee and humanitarian program is carefully managed, reflecting policy decisions of the Australian government. The government’s success in restoring secure borders has been fundamental to our successful management of the program.”