Migrants trying to reach Europe from Africa are being trafficked through a dangerous new route via the Atlantic Ocean and Spain’s Canary Islands.

This year has seen a 520 per cent rise in migrant arrivals in the Canary Islands with 3,448 arrivals, compared to the same period last year, according to the Spanish government. 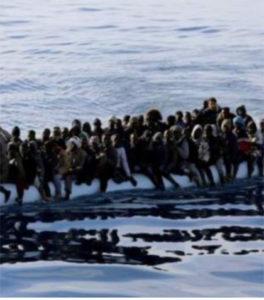 By contrast, there was a 27 per cent fall in the number of migrants crossing the Mediterranean to Spain so far this this year – compared with the same period in 2019; 10,716 arrivals this year compared to 14,597 last year.

And the data shows the new Atlantic route is taking deadly toll, with a total of 239 migrants deaths among those reach the Canaries between January 1 and August 19 – compared to 210 during all of last year, and 43 in 2018, according to the International Organization for Migration, IOM.

Some of the journeys take five days. The boats depart from Morocco and Mauritania, the two nations closest to the archipelago, but also from Senegal and Gambia, over a thousand kilometers further south.

Most migrants attempting the crossing come from Africa’s Sahel region and Western Africa, the migrant rights group Entre Mares said in a statement.

And traffickers have lowered their prices from around $US2,377 to about $US951, the agency said.

It said some arrivals have originated from as far away as South Sudan and the Comoros Islands in the Indian Ocean.

Although, the COVID-19 crisis may have influenced the traffickers’ strategy, the Canary Island route is not new.

In September last year, Frontex (the EU’s frontier security force) said that the route was changing. A decision by Morocco, at the behest of EU nations, to tighten security and move migrants away from its northern Mediterranean shore in has prevented migrants from setting off in dinghies or small boats.

The European Union paid Morocco $US463 million to support reforms including border management – and a clamp down on migrant departures.

Similar deals have been struck between the European Union and Libya and Turkey, which have also served as launching pads for migrants trying to cross the Mediterranean to Europe.

Migrant advocates say the policy has pushed the migrant trade into the more dangers waters of the Atlantic.

And local NGOs says they are completely overwhelmed trying to support the migrants.

One migrant dies for every 16 who reach the archipelago alive.

The advocates say migrants are setting off on packed, shaky boats which are driven by people without experience.

Migrants who arrive in the islands are tested for COVID-19 and anyone found to be infected must quarantine.

But migrants can wait up to six months for their asylum cases to be considered while they are forced to live in cramped, unhygienic conditions.

The Canary Islands have been a hotspot for migrants before – in 2006, about 30,000 migrants managed to reach the archipelago before stepped-up Spanish patrols then slowed the pace.
Loading comments...