Awareness about dementia is becoming an issue among diverse communities as Australia’s population becomes both older and more multicultural, public health experts say.

As the Australian population ages, rates of dementia are also on the rise, which has led to concerns about whether the healthcare system can meet future patient needs. 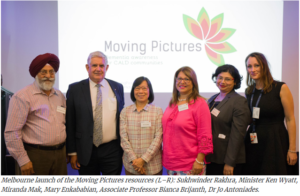 And, there are extra barriers for people from culturally and linguistically diverse (CALD) communities in accessing care, according to Associate Professor Bianca Brijnath, Director Social Gerontology at the National Ageing Research Institute.

“About one in three Australians are from a migrant background, they’re CALD,” Professor Brijnath said.

Currently, there are an estimated 447,115 Australians living with dementia.

And, people with dementia account for 52% of all residents in residential aged care facilities.

“Timely diagnosis is very important to people with dementia, their families and communities, to enable them to do a bit of planning, think about what kind of care they want, and what kind of interventions can be put in place, including end-of-life care,” Professor Brijnath said.

Recognising the signs of dementia can be challenging for any patient, but Professor Brijnath has found there can be additional barriers to diagnosis in CALD communities.

“There’s limited awareness of dementia, and of the aged care system and services in many CALD groups,” she said.

“It’s not necessarily seen as a medical condition, and that often leads to delayed diagnosis.”

The problem of how to raise awareness of dementia in CALD communities, has led Professor Brijnath and her team to create the Moving Pictures project which uses film and digital media for its immediacy and ease of communication.

“It bypassed a whole lot of barriers associated with literacy, so we didn’t have to worry about whether people could read or write or understand English or their own language,” she said.

Before writing scripts and picking up cameras, the team engaged in a lot of preparation for the project. First, they decided to focus on Tamil, Hindi, Cantonese, Mandarin and Arabic-speaking communities, as these are Australia’s top five fastest growing cultural and linguistic groups.

Next, they undertook a study across the country to gather data from each of these communities about what type of information would be helpful.

They also spoke to a number of frontline service providers considered important to the project.

“I think GPs play a really critical role in CALD communities, much more so than we would see in other mainstream communities, because they are a key entry point [into the healthcare system] for them,” Professor Brijnath said.

“But also, the GP is a lighthouse when people are navigating dementia and trying to understand this condition and the behaviours associated with it, and how life is just completely rescripted for the person with dementia and the carer and their family.

“GPs are a critical source of support during this tumultuous period, they can really help people,” she said.

During the course of her research, Professor Brijnath has found GPs often provide vital support for the carers of people with dementia, as well as the patient themselves.

“In many CALD communities there is a sense that care should happen within the home and the family. But it can sometimes get to a point where carers really need external help, just to make the burden a little bit lighter, whether it’s getting a cleaning service once a week, or someone else taking a person with dementia for a coffee, or a little bit of respite so the carer can go out for a coffee,” she said.

The Moving Pictures project was funded by the Department of Health and Aged Care, and all the resources it has produced are free for use throughout the community. They are available through the project’s website, and include 15 short films in five languages, as well as comic books for people who prefer to read the information.