Denmark is set to become the first European country to deport Syrian refugees back to their home country after deeming areas of the strife torn nation safe.

The Scandinavian country has decided to send 94 Syrian refugees to deportation camps and ultimately back home saying the Syrian capital Damascus and its surrounding areas are now safe. 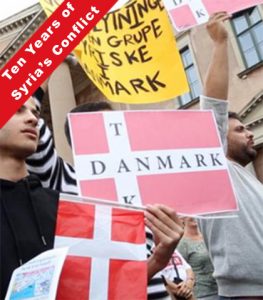 Danish authorities have stripped the 94 refugees of their residency permits.

The move comes as the ten year anniversary of the start of the Syrian conflict has been marked.

And also despite the fact Millions of Syrians are now facing desperate levels of hunger and destitution as well as acute vulnerability to COVID-19.

Aid agencies report that having already endured almost a decade of war and displacement Syrians now face levels of poverty unprecedented even in their strife-torn country.

Recent COVID‑19 restrictions, the collapse of the Syrian economy and the displacement of millions of people have led to an unprecedented number of families in Syria who are no longer able to put food on the table or make enough money to afford basic necessities, the NGO Mercy Corps says.

A staggering 9.3 million Syrians are now going to sleep hungry and more than another 2 million are at risk of a similar fate – part of an overall rise of 42 percent in the number of Syrians facing food insecurity in the past last year.

But Syrian migrants stripped of their status in Denmark will not be forced to leave the country immediately.

“We have made it clear to the Syrian refugees that their residence permit is temporary. It can be withdrawn if protection is no longer needed,” Denmark’s immigration minister Mattias Tesfaye said.

Mr Tesfaye said Denmark would “give people protection for as long as it is needed,” however, “when conditions in the home country improve, a former refugee should return home and re-establish a life there.”

The decision came after the immigration department decided to enlarge safe areas in Syria by adding the Rif Dimashq Governorate, which includes Damascus.

Despite Germany’s decision to deport criminals back to Syria, Denmark would be the first European nation to tell ordinary Syrian refugees to return to their country.

Danish Prime Minister Mette Frederiksen has said that her goal is to receive ‘zero’ asylum seekers under her strong anti-migration policy.

Denmark’s decision is being criticised by human rights groups.

“That the Danish government is seeking to force people back into the hands of this brutal regime is an appalling affront to refugee law and people’s right to be safe from persecution,” said a statement from Amnesty International.

“This reckless violation of Denmark’s duty to provide asylum also risks increasing incentives for other countries to abandon their own obligations to Syrian refugees.”

“Not only will this put the lives of even more women, men and children at risk. It will add to reasons that cause people to travel ever further afield in search of safety and security for themselves and their family,” the statement said.

Meanwhile, the United Nations has called for an immediate ceasefire in Syria.

The UN Commission of Inquiry on Syria said its overarching recommendation is for an immediate and permanent ceasefire in the country.

The commission released a report to be presented to the UN Human Rights Council (HRC), focusing on people’s disappearance and detentions in the 10-year conflict.

“Such a ceasefire must be genuine, and safeguards should be put into place to ensure that it is not simply used as a means to prepare for fresh offensives, but instead provides the space for Syrian-led negotiations and for the restoration of the basic human rights that have been so long denied,” the commission said.

It said that no party in the Syrian conflict has respected the rights of detained persons.

“Male and female prisoners were also raped,” it said.

The Commission of Inquiry’s report was based on more than 2,500 interviews done over ten years, as well as probes into more than 100 specific detention facilities.