Distilling the US immigration debate

The polarisation of the migration debate in the US came into stark relief this week.

President Donald Trump took his anti-immigrant policies to new levels with a sweeping ban on asylum-seekers while also launching twitter attacks on four female Democrats of colour to leave the country. 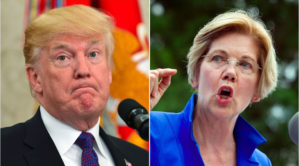 New York’s Alexandria Ocasio-Cortez is Latino; Minnesota’s Ilhan Omar and Michigan’s Rashida Tlaib are Muslim; and Massachusetts’ Ayanna Pressley is black and all four have become favourite targets for Trump in recent weeks.

At a League of United Latin American Citizens event in Milwaukee, Senator Warren released a proposal that unsurprisingly serves as a clear rebuke of President Trump’s immigration agenda.

But observers say President Trump’s rhetoric is aimed at his own base and with a view to improving his re-election prospects.

One conservative pundit even said the outburst was designed to distract from his failures on the issue.

“More illegal aliens are entering America than ever before on President Trump’s watch because of Trump’s broken campaign promises and presidential directives and policies,” said William Gheen of the group Americans for Legal Immigration.

During his presidential campaign, President Trump promised to force Mexico to build a wall along its border with the United States and claimed he was the only Republican capable of ending illegal immigration.

Since taking office, there has been no request of Mexico that it pay for a wall, and the president has tried to raid billions of dollars from the military budget to pay for it.

Meanwhile, the legality of the new sweeping ban on asylum seekers, remains unclear.

“Today’s rule is blatantly intended to slam the door on the vast majority of those seeking asylum from Central America, and I suspect the courts will have something to say about that,” said Bill Weld, a former top lawyer at the Justice Department and now a Republican challenger to Trump for the 2020 nomination.

“The legal and moral obligation to welcome those legitimately seeking asylum in the US is part of our basic fabric. How many of us are here today because our ancestors at some point made a difficult journey here to find better lives or to escape very real dangers?” Mr Weld told the US media.

Existing laws set out the process for would-be asylum-seekers in the US, which matches with international treaties that the US has signed.

These permit foreign nationals seeking asylum in the United States to present themselves at a port of entry.

The Trump administration’s new rule requires them to seek asylum from the first country they are traversing en route to the United States.

But migration lawyers argue the move contravenes the US Constitution.

President Trump himself seems to be focused less the law changes and more on his attacks on the four female Democrats.

The President has a history of openly appealing to racists and nativists since his false 2011 claims questioning President Obama’s religion and country of birth.

In a speech announcing his own candidacy in 2015, Trump called Mexican migrants “rapists” and “drug dealers.”

And during his two and a half years in office, Trump has said there were “good people” among the neo-Nazis who marched on Charlottesville in 2017.

Amid reports of unsafe and unhealthy conditions in immigration detention centres along the US’ southern border, Senator Warren plans to reduce detention overall and eliminate private detention facilities.

As the administration announced sweeping bans on asylum seekers and cuts to the refugee intake, Senator Warren pledged to admit six to eight times as many refugees as Trump has in her first years as president, and to implement proposals that would make it easier for asylum seekers to get a day in court.

And as millions of undocumented immigrants who came to the US as children live in legal limbo as the administration sunsets the Deferred Action For Childhood Arrivals program, Senator Warren is calling to expand the program for DREAMers and their families, as well as those with Temporary Protected Status.

Warren is also calling for more support for legal immigration, including redistributing unused visas to address the millions currently in the backlog waiting for a way to enter the United States, and lower barriers to naturalization – like application fees – facing green card holders.