The European Commission has faced a storm of criticism for creating the position of a vice president responsible for “Protecting our European Way of Life”.

The Commission, the European Union’s executive branch, says the new vice president will work on migration, among other issues such as education, security and employment. 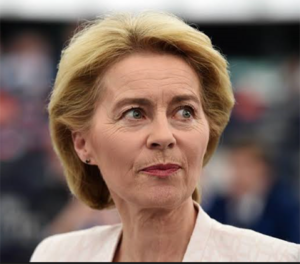 But critics seized on the fact that the commissioner will work on both security and migration issues. Directly linking both topics, they say, could suggest that migrants are by default perceived to be security risks.

Dutch liberal member of the European Parliament Sophie in ‘t Veld said the move was “totally misguided and reprehensible”.

“The implication that Europeans need to be protected from external cultures is grotesque and this narrative should be rejected,” she said in a statement.

“We need protection for our democracy, against climate change etc – not against migrants,” the European Trade Union said on Twitter.

He said the far right has frequently portrayed migration — especially of Muslim asylum seekers to Europe — as a threat to what they say is the continent’s ‘Judeo-Christian identity’.

New European Commission President-elect Ursula von der Leyen announced the new role and proposed Greek representative Margaritis Schinas for it, as she introduced the nominees for her new 27-person team this month.

Since Europe’s 2015 refugee influx, the continent’s anti-migrant far right has seen its approval ratings rise in some places, allowing it to put more pressure on the EU to adopt a more immigration-sceptical stance.

Member states such as Hungary and Poland have frequently with the European Commission over the treatment of asylum seekers in recent years.

But the European Commission has denied its new “Protecting our European Way of Life” job constituted a bowing to voices who demand that refugees be denied equal treatment.

“Actually the central mission that Vice-President Schinas will be tasked to ensure is to coordinate the work on inclusion and ‘building a genuine Union of equality and diversity,” the EC said in a media statement.

Von der Leyen is not known as an anti-migration voice. Some consider her to be the opposite.

Before becoming president-elect of the European Commission, she was a key member of German Chancellor Angela Merkel’s cabinet in Berlin.

In various roles — most recently as Germany’s minister of defence — von der Leyen was considered to be loyal to the moderate-conservative Merkel, even as more right-wing opponents within her party challenged her.

When Merkel adopted a pro-refugee stance amid the mass migrant influx in 2015, von der Leyen defended her.

Merkel in return has supported an EU draft proposal by von der Leyen that would take some of the burden off southern European member states — where most asylum seekers arrive — and ensure a fairer distribution of newly arrived migrants.

As head of the EU’s executive branch, von der Leyen is expected to push for reforms at a critical time, as Britain continues to wrangle itself over Brexit.

In her speech at president elect, von der Leyen emphasized that the new European Commission team — if approved — will be more gender-diverse than any other in European Union history although critics says it is still overwhelmingly white.