The COVID-19 pandemic is putting humanitarian efforts under enormous stress, according to a new report, which also raises questions about how equal the access to vaccines will be.

The ‘Tracking the Coronavirus’ report by the New Humanitarian organisation says that although many countries have started rolling out coronavirus vaccines, it’s not clear when – and even how – these vaccines will reach people caught in crisis zones. 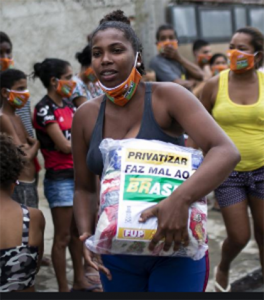 Meanwhile, the pandemic is driving record-breaking humanitarian needs with Global aid response plans totalling more than $US35 billion this year.

In 2020, the pandemic doubled the number of people who needed humanitarian aid worldwide, according to the UN, with at least 28 global humanitarian appeals underway in 2021.

“Beyond the immediate humanitarian impacts, the cost of helping the world’s most vulnerable 10 percent facing COVID-19’s socio-economic repercussions could total $90 billion, according to UN estimates,” the New Humanitarian report says.

“The World Bank estimates the pandemic pushed between 119 million and 124 million “new poor” into extreme poverty last year – a shift unlikely to be reversed in 2021,” it says.

The report argues there is a divide between nations who have early access to coronavirus vaccines and those who do not.

The World Health organisation (WHO) has warned of “vaccine nationalism”, hoarding, and queue-jumping as wealthier countries buy up early supplies.

“The world is on the brink of a catastrophic moral failure – and the price of this failure will be paid with lives and livelihoods in the world’s poorest countries,” WHO Director General, Tedros Adhanom Ghebreyesus said.

The report says that three quarters of all global doses were held in just ten countries, and more than 94 per cent of countries beginning vaccinations were high-income or upper-middle-income.

Around 130 countries were yet to administer a single dose, the report said.

The WHO has forged agreements to reserve some 1.3 billion doses for 92 low- and middle-income countries under the COVAX program, which was created with the goal of ensuring equal vaccine access, including doses for at least 20 per cent of countries’ populations.

But Mr Tedros said wealthier countries are circumventing COVAX by signing dozens of bilateral deals with manufacturers and driving up prices.

Countries will receive their first COVAX doses in late February or early March, the WHO and other agencies behind the scheme have announced.

Bosnia and Herzegovina, Colombia, the Philippines, Rwanda, and South Africa will be among the first handful to receive vaccines through the program.

“Current planning calls for some 330 million doses – enough to cover 3.3 percent of participating countries’ populations – in the first half of 2021. This timeline also depends on WHO approving the Oxford-AstraZeneca vaccine, which makes up the bulk of COVAX doses, for emergency use,” the report said.

“Beyond vaccine access at the country level, there are fears that marginalised groups often left out of government health planning at the best of times – migrants, refugees, and other people in crises, for example – may be at the very back of the queue,” the ‘Tracking the Coronavirus’ report said.