EU slammed over use of drones in refugee effort

The European Union has come in for criticism from human rights groups after it has moved to replace ships with drones in responding to the influx on migrants across the Mediterranean Sea. 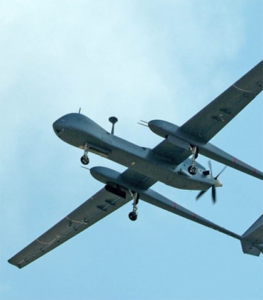 While pulling back its naval mission, the EU has invested $US115 million in drone technology for surveillance of migrant boats.

This has brought condemnation from human rights groups who say it is an abrogation of the EU’s responsibility to save lives.

European border and coast guard agency Frontex has surveillance drones are flying over waters off Libya where not a single rescue has been carried out by the main EU naval mission since last August, in what is the deadliest stretch of water in the world.

The replacement of naval vessels with drones means rescues cannot be carried out.

Since March the EU’s main naval mission in the area, Operation Sophia, has withdrawn its ships from waters where the majority of migrant boats have sunk.

While Sophia was not primarily a search-and-rescue mission, it was obliged under international and EU law to assist vessels in distress. The switch to drones appears to amount to a policy switch in which the EU can monitor the Mediterranean without being pulled into rescue missions that put migrants on European shores.

“This could have potentially lethal consequences. We panicked in 2015 and that panic has turned into security budgets,” Ms Foresti said.

“Frontex’s budget has doubled with very little oversight or design. It’s a knee-jerk reaction,” she said

Director of Italy’s Centre for International Studies Gabriele Iacovino said the move into drones was “a way to spend money without having the responsibility to save lives”.

“Aerial surveillance without ships in the water amounted to a naval mission without a naval force”, and was about avoiding embarrassing political rows in Europe over what to do with rescued migrants, Mr Iacovino said.

German Greens party MEP, Erik Marquardt told media this week that there was no obligation for drones to be equipped with life-saving appliances and to conduct rescue operations.

“You need ships for that, and ships are exactly what there is a lack of at the moment,” he said.

This year the death rate for people attempting the Mediterranean crossing has risen from a historical average of 2 per cent to as high as 14 per cent last month. In total, 567 of the estimated 8,362 people who have attempted it so far this year have died.

The EU is already accused of crimes against humanity in a submission before the International Criminal Court for “orchestrating a policy of forced transfer to concentration camp-like detention facilities [in Libya] where atrocious crimes are committed”.

The case, brought by lawyers based in Paris, seeks to demonstrate that many of the people intercepted have faced human rights abuses ranging from slavery to torture and murder after being returned to Libya.

Under international law, migrants rescued at sea by European vessels cannot be returned to Libya, where conflict and human rights abuses mean the UN has stated there is no safe port.

Under the UN convention on the law of the sea all ships are obliged to report an encounter with a vessel in distress and offer assistance.

Drones operate in a legal grey zone not covered by the law of the sea.