Europe’s asylum systems have been thrown into chaos by the COVID-19 pandemic with social distancing rules causing havoc for tens of thousands of people seeking safety, according to a new report from the Migration Policy Institute (MPI).

The report, by the MPI’s Europe Director Dr Hanne Beirens, points to specific asylum issues with the Maltese government declaring it can no longer guarantee the rescue of migrants at sea, the Dutch State Secretary suspending the registration and interviewing of new asylum seekers because of the ‘contact-intensive’ nature of the asylum procedure, and the Bulgarian and Irish courts freezing appeal hearings. 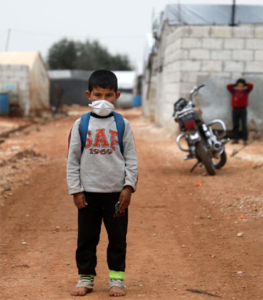 It says asylum seekers remain stuck at Hungarian borders, in overcrowded and unsanitary camps in Greece, or sleeping rough under French bridges.

And Belgium’s reception agency is struggling to find alternative housing for many of the inhabitants of its 70 reception centres,” the report says.

Dr Beirens says that large centres are the norm in many asylum systems across Europe but are now proving to be a logistical nightmare as authorities try to separate groups or quarantine potentially infected people.

“The chaos in dealing with the COVID-19 epidemic has yet again thrown in sharp relief the vulnerability of asylum systems in Europe,” the report says.

“Four years after the 2015-16 migration and refugee crisis taxed European asylum systems to the hilt, the weak spots have reappeared, including the severe underuse of digital tools to continue asylum processing from a distance,” it says.

After 2015, the height of the migration crisis in Europe, policymakers agreed on preventative measures, such as forecasting migratory movements or maintaining buffer capacity with vacant accommodation.

But this has not prevented a long list of countries from phasing out the capacity built up in 2015-16.

“Over the last two years, reception agencies in Belgium, France, Ireland, Malta, the Netherlands, and Portugal have continuously flirted with a 100 percent occupancy rate and regularly plunge into a mini-crisis as new arrivals pick up or, as now, social distancing requires additional, yet unavailable, housing,” Dr Beirens said.

“Asylum seekers, often in an already vulnerable position, are the first to suffer from governments’ willingness to ignore the need for flexibility and surge capacity in housing and case workers. It needs only a pandemic to rear its head to expose how short-sighted governments have been and how quickly lessons learned painfully just a handful of years ago have been forgotten,” she said.

Dr Beirens says that in spite of a vast body of EU laws that outlines the basic parameters for protection in good and bad days, individual asylum systems are still prone to falling sway to the siren call of domestic politics and agendas.

“With the COVID-19 crisis laying bare the frailties of European asylum systems, the question arises whether this time policymakers will take the lessons to heart,” Dr Beirens said.

“A string of recent events, for example the inability of the European Parliament to agree on a renewal of search-and-rescue missions in the Mediterranean in 2019 or of the European Commission and European Council to safeguard the right to asylum amid the Turkey-Greece power struggle in March, offer signs of the diminished political capital that policymakers are still willing to invest in upholding protection regimes,” she said.

But timely interventions could help shore up the robustness and survival of protection regimes in Europe, the report says.

It says that preparing asylum systems for the era of social distancing is one key strategy. The

Also, an enhanced EU-wide monitoring and evaluation system could offer real-time updates on the capacity of national asylum systems and send early warnings on reception shortages, for example.

This would allow the European Commission to quickly detect problems within individual Member State systems and proactively coordinate action before the crisis hits, the report says.

“In all of these matters, time is of the essence. The question ‘who do we protect?’ which in the early weeks of the pandemic has understandably focused on the health of Europe’s citizens, now needs to be enlarged again to include those who struggle to find safe refuge,” the report said.