Fears over Malaysia plan to deport migrants back to Myanmar

Malaysia is set to deport migrants and asylum seekers back to Myanmar amid fears the returnees will face persecution from the nation’s military, which staged a coup and seized power on February 1.

The United Nations refugee agency UNHCR has reported at least six people registered with it were among 1,200 Myanmar nationals to be deported by Malaysia. 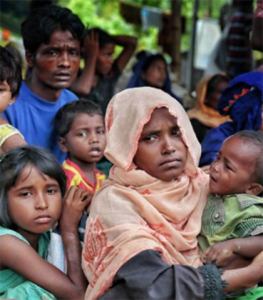 And the United States Department of State has warned the plan could put deportees’ lives at risk.

Already, Myanmar naval ships arrived in Malaysian waters to pick up the detainees.

But concerns over the deportation of unregistered asylum seekers persist as the UNHCR has not been allowed to interview detainees for more than a year to verify their status.

Malaysia does not formally recognise refugees and arrests them along with other undocumented migrants.

Human rights groups have asked Malaysia to scrap the deportation, saying it would endanger the deportees. Some of the deportees include people from Myanmar Muslim and Chin communities who arrived in Malaysia fleeing conflict and persecution at home.

But the deportations appear to be going ahead despite Myanmar continuing to descend into turmoil after the coup and the Malaysian government speaking out on the Myanmar military takeover.

Prime Minister Muhyiddin Yassin called it a “setback to democracy” and joining Indonesian President Joko Widodo in calling for an Association of Southeast Asian Nations meeting on the crisis.

But Malaysia has come under fire for the deportation plan.

“The principle of non-refoulement applies also in Malaysia as part of customary international law which is binding on all states,” a UNHCR statement said.

That principle of non-refoulement says that no one should be returned to a country where they would face danger.

A particular concern is whether any of the detainees are Rohingya Muslims — hundreds of thousands of whom fled alleged persecution by Myanmar’s armed forces in the years before the coup.

Another concern is the difficulty of distinguishing undocumented immigrants from refugees who have lost their UNHCR cards.

Malaysia has long held concerns that it might become a regional hub for illegal immigration. The nation is not a signatory to the United Nations’ 1951 convention and 1967 protocol on the status of refugees.

Malaysia criminalises all arrivals without proper documentation, while refugees are not allowed to work, do business or receive health care discounts.

The UNHCR says there are 178,610 refugees and asylum seekers registered with in Malaysia. Among them are 154,000 were from Myanmar — mostly Rohingya Muslims.