A compelling new film tells the real life story of an Afghan family’s heart-wrenching journey from their homeland to seek safety in Europe.

In his film ‘Midnight Traveler’, director Hassan Fazili captures the uncertainty and danger of his family’s flight from the Taliban while throwing light on issues facing migrants. 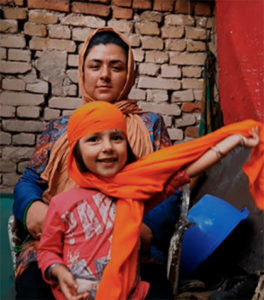 It is a stunning autobiographical story of migration that hammers home the vulnerabilities refugees face.

The film starts with Fazili and his family hastily packing their belongings and preparing for their 5,600-kilometer journey to Europe after the Taliban has put a bounty on his head.

The family hopes to seek asylum and escape the dangers of their home country of Afghanistan.

But the journey presents innumerable challenges, as they constantly face discrimination and violence from foreigners during their stays at refugee camps and travels as asylum-seekers.

The entire film showcases a first-person perspective of the family’s departure.

The family has three mobile phones to capture the entire movie. Either Fazili, his wife Nargis or his daughter Zahra uses a phone for the entirety of their journey to share each member’s viewpoint.

This amounts to an incredibly detailed and intimate portrayal of what it feels like to be on a journey of this nature – forced to leave home in the hope of starting a better life somewhere else.

The emotionally intense cinematography more than makes up for the technical quality of the camerawork.

Each obstacle the family must get through features narration by one of the family members.

This gives the audience a strong understanding of the emotional turmoil each family member goes through at various points in the film.

The film ends with the family’s story still in limbo – with answers to important questions about the family’s fate after their trek.

This is perhaps symbolic of the fate of many refugee, who continue to live in uncertainty even after reaching a safe, if semi-permanent, haven.

As Nargis mentions in the film, gaining asylum after arriving in a country can be just as difficult as getting to the country itself.

‘Midnight Traveler’ is a powerful movie that will leave its viewers deeply affected by the visceral depiction of a family’s journey to safety.

In some ways it is positive in that it gives a renewed sense of the urgency of finding humane and durable ways to welcome refugees fleeing violence across the globe.

It is film that just might changes people’s minds about refugees.