Democracy, human rights and freedom across the world are under threat again with dictators on the rise and the rights of minorities being undermined, according to survey of the global condition of liberty and social justice.

The report by democratic think tank Freedom House found that 2019 was the 14th consecutive year of decline in global freedom. 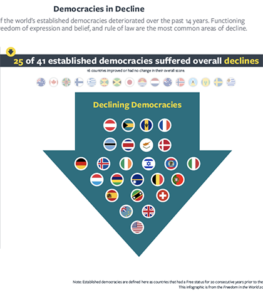 “Democracy and pluralism are under assault. Dictators are toiling to stamp out the last vestiges of domestic dissent and spread their harmful influence to new corners of the world,” the Freedom in the World 2020” survey, released report said.

It said things were especially dire in emerging democracies with more than half of the countries that were rated Free or Not Free in 2009 have suffered a net decline in the past decade.

In India, the report highlights three actions that have eroded the rule of law and protection of minorities.

Firstly, the government’s annulment of the semi-autonomous status of the Muslim-majority state of Jammu and Kashmir; also, the disenfranchisement of nearly two million people in the state of Assam – believed to be an effort to exclude Muslims; and passage of the Citizenship Amendment Law, which “expedites citizenship for adherents of six non-Muslim religions from three neighbouring Muslim-majority countries.

In China, the report highlights examples of authoritarianism, including China’s crackdown on democracy protesters in Hong Kong, persecution of Uighurs and media censorship.

The United States has also come in for criticism in the report with the report saying President Trump has severely compromised its historic support for democratic values by “excusing” clear human rights violations by security partners such as Turkey and Egypt.

The report says President Trump has also given support to authoritarian leaders whom he hopes to engage diplomatically, including Vladimir Putin of Russia and Kim Jong-un of North Korea.

Domestically, the report says, President Trump continues to violate democratic norms and values by putting pressure on electoral integrity, judicial independence, and safeguards against corruption as well as “fierce rhetorical attacks on the press”.

He has also undermined the “the rule of law, and other pillars of democracy”, the report says.

“An ongoing decline in fair and equal treatment of refugees and asylum seekers is also particularly worrisome for a country that takes pride in its traditional role as a beacon for the oppressed,” the report said.

Since 2009, the United States has fallen eight points on Freedom House’s 100-point scale.With a score of 86, United States is now ranked behind countries such as Greece, Slovakia, Italy and Mauritius.

The Freedom House report also criticised Israel’s Prime Minister Benjamin Netanyahu who, it says, has “taken increasingly drastic steps to maintain the loyalty of far-right groups, entrenching and expanding West Bank settlements at the expense of the… Palestinian peace process, banning foreign activists based on their opposition to such policies, and enacting a discriminatory law that reserved the right of self-determination in Israel to the Jewish people”.

It noted that under Prime Minister Viktor Orban, Hungary has lost 20 points in the Freedom in the World survey over the past decade and become the first European Union member to be classified as only ‘Partly Free’.

Under the Law and Justice Party, meanwhile, Poland’s freedom score has fallen nine points since 2015, the report says.

The Freedom House report urged democratic governments to respect democratic institutions and to require that social media companies report efforts by foreign governments and other actors to spread disinformation and propaganda on their platforms.

Despite the dire findings, the report says there is cause for hope.

“The mass protests that emerged or persisted in 2019 in every region of the world are a reminder that the universal yearning for equality, justice and freedom from oppression can never be extinguished,” it says.

Australia scored well on the freedom index with 97 points out of 100 – dropping one point of last year. It rated 40 points out of 40 on political rights and 57 out of 60 on civil rights.