For the first time since the 1920s a German politician has been murdered by a racist right-wing extremist.

Last month a neo-Nazi with a history of violence against immigrants gunned down Walter Lubcke, the District President of Kassel, in central Germany, outside his house. 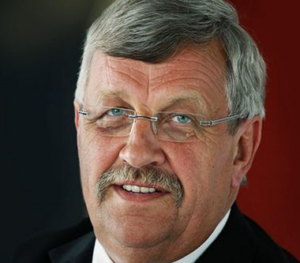 The killing was allegedly committed because of Mr Lubcke’s support for Chancellor Angela Merkel’s refugee policies.

There have been 195 murders by right-wing extremists since the re-unification of Germany in 1989. But this one has shocked the nation because it was the first time a German politician had been assassinated since 1922.

Then, during the unstable years of the Weimar Republic, Walther Rathenau, the foreign minister, was shot in his car on the streets of Berlin.

Just a few weeks after Mr Lubcke’s death, more than 10,000 people took to the streets of Kassel to march against right-wing violence.

Fellow Christian Democrat politician Armin Laschet said the murder was a warning to Germans of the rise of right-wing extremism.

“Never in our republic’s 70 years has democracy been challenged from the right as it is nowadays,” said Mr Laschet, the state premier of North Rhine-Westphalia, who, like Mr Lubcke, is a member of Chancellor Angela Merkel’s Christian Democratic Union (CDU) and supports her refugee policies.

The alleged killer is 45-year-old Stephan Ernst.
Ernst is known to have held extreme right-wing political views and had links to the far-right National Democratic Party of Germany (NPD) and the German branch of the British neo-Nazi terrorist group Combat 18 (C18).
Ernst had also been previously convicted for knife and bomb attacks against targets connected to ethnic minorities in Germany.
But some commentators are saying that Germans have been slow to show disgust at the rise of the far right.

Foreign minister Heiko Maas’s called for a series “Thursdays for Democracy” protests – similar to demonstrations of solidarity with climate change action – but they have failed to materialise.

“Why are the people of my country not flooding to the streets in disgust?” asked newspaper columnist Hatice Akyun. “Now, after the death of Walter Lubcke … After death threats against Cologne mayor Henriette Reker and dozens of other politicians,” she said.

For the far-right party Alternative fur Deutschland (AfD), aggressive denial seems to have been the strategy rather than self-restraint.

Speaking in the Bundestag last week, AfD delegate Gottfried Curio said the Lubcke murder was being used to defame “political enemies”, while his party colleague Martin Hess complained that other parties were waging a “campaign of annihilation” against the AfD.

In the Bavarian parliament, one AfD politician refused to stand for a minute’s silence in Mr Lubcke’s honour, while the state parliament in Stuttgart saw the party’s Wolfgang Gedeon dismiss far-right terrorism as “bird s&*t” compared to the threat posed by the far left and radical Islamists.

But among liberals, there is hope that the murder of Lubcke, a lawmaker with little name recognition outside his own state, could have a more lasting effect on Germany’s political direction.

Observers say that Mr Lubcke’s killing had triggered an intense debate among the CDU’s voters about the roots of extremism.

“The idea that the CDU can win back voters by tacking right and imitating the AfD is off the table. The party is more united on this question than only a year ago,” one commentator said.