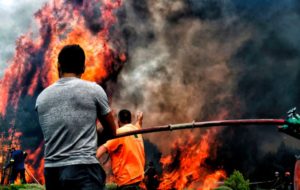 Greek Australians are trying to help people affected by the deadly wildfires that have killed more than 100 people and destroyed dozens homes.

The Greek Community of Melbourne (GCM) has contacted the Greek Deputy Minister of Foreign Affairs, Terence Quick, and the Greek Ambassador to Australia.

GCM says it was advised to get organised but to wait for direction from Greece to best target any assistance the diaspora would be offering.

In the meantime, GCM says it has reached out to other Victorian Greek community organisations seeking a collaborative approach for the inevitable relief program.

“We have spoken with the Delphi Bank and the Bank of Sydney and asked them to open accounts to allow donations to start being collected,” said GCM President Bill Papastergiadis.

“I am sure that there will be a number of ways in which we can assist and we have already started to collate the possible relief beneficiaries,” he said

In Sydney, the Greek Orthodox Community of NSW (GOC) launched an urgent appeal, facilitating an open forum on Friday to give people a chance to contribute ideas to their aid efforts.

“We need to come together as a community to help our fellow countrymen whose lives have been thrown into chaos by this tragedy,” said GOC president Harry Danalis.

Also, the management board of the Greek Orthodox Community of South Australia (GOSCA) in association with the Bank of Sydney is set to hold an emergency meeting to discuss ways in which they can provide assistance to those affected.

The death toll from the fires that swept through parts of Greece last week rose to 91 over the weekend with 25 people still missing.

Nearly 200 people, including children, were injured in the blazes.

The fire broke out in multiple places simultaneously in forest areas on July 23. Fanned by winds of up to 60 miles per hour, the fires quickly grew into raging infernos.