Home » Latest Articles » How Germany is getting migrants into work

How Germany is getting migrants into work

Welfare payments to migrants in Germany have plunged 12 per cent in the past year in line with a fall in the proportion of the broader populations receiving government payments.

Germany’s Federal Statistics Office (Destatis) recently published data showing that 411,000 people were claiming asylum seekers’ benefits at the end of 2018, down from 458,000 in 2017. 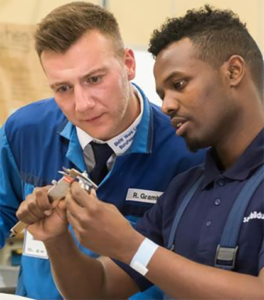 The has been attributed partly to fewer asylum claims and the higher number of completed or decided cases but also top Germany’s apprentice training system, which has seen thousands of migrants qualify and take up jobs as trades people.

Under the 1993 Asylum Seekers’ Benefits Act, people seeking refuge from conflict or oppression are entitled to claim welfare when they apply for asylum in Germany.

According to separate German government figures, 185,000 asylum applications were lodged last year, a 16 per cent drop from the previous year.

Of those claims, around 161,931 came from first-time applicants, while just under 24,000 were follow-up requests.

Germany has struggled to clear a backlog of asylum applications that arose during the 2015/16 European migrant crisis.

In 2016, Germany saw a peak of 722,370 asylum applications being lodged from the more than a million migrants who arrived in the country during that period.

With the German economy needing workers, the nation is pushing asylum seekers into vocational training.

Nearly four years after German Chancellor Angela Merkel chose to leave the country’s borders open amid a vast influx of asylum seekers to Europe, a significant majority of the approximately 1.5 million people who have arrived since remain out of the labour force.

Many are taking required integration and language courses. Nearly 200,000 are registered as unemployed.

But after spending billions of euros to accommodate the newcomers, Germany is beginning to reap some gains. The number who are either working or participating in a job training program has been growing, and was at more than 400,000 as of the end of 2018. Of those, 44,000 were enrolled in apprenticeships, according to German business groups.

Germany is also benefiting from the demographic profile of its new arrivals, about 60 percent of whom were 25 or younger.

The German apprenticeship system has its origins in the guilds of the Middle Ages and is considered a global exemplar.

Apprentices split their time between a vocational school and on-the-job training, often spending three years or more mastering their profession. They are sponsored by a company that invests in their skills and typically hires them once the training is complete.

Each year the program churns out hundreds of thousands of master craftsmen and other professionals who have passed rigorous, nationally administered exams.

Experts say the system, and its exacting standards, has been a key factor in making Germany an industrial powerhouse.

But many young Germans are opting to bypass this traditional path to a middle-class life and gravitating toward university degrees instead. Last year, one-third of German companies said they had training spots that went unfilled as vacancies hit a 20-year high.