Home » Latest Articles » How Trump killed the US asylum system

How Trump killed the US asylum system

In the three years of the Trump administration in the US, the nation’s asylum system has been utterly transformed.

President Trump and his senior aides have built layers of impediments in Central America, at the border with Mexico and in the immigration courts that have made obtaining asylum almost impossible. 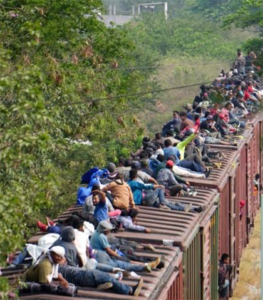 The changes have been made quietly and have not sparked the kind outrage that the President’s travel bans saw in January 2017 — when thousands of people flooded airports to stand up for people barred from entering the US.

And they haven’t resulted in same the uptick in protest against the “zero tolerance” policy that led to family separation in spring 2018.

Trump ultimately backed down on separating families in immigration detention.

But the policy was just one piece of bigger policy jigsaw aimed at stopping asylum seekers that was orchestrated by White House senior adviser Stephen Miller.

Migrants can obtain asylum in the US if they have “credible fear” of persecution in their home countries on account of their race, religion, nationality, political opinions, or membership in a “particular social group,” such as a tribe or ethnic group.

Once they are granted asylum, they can obtain social services through refugee resettlement agencies and apply for a green card one year later.

Historically, most asylum seekers apprehended while trying to cross the southern border would have been placed into deportation proceedings, but released into the US while awaiting a decision on their immigration cases. Under the Trump administration, that changed dramatically.

During his election campaign, Trump promised to build a wall on the southern border and make Mexico pay for it.

While that hasn’t happened, the President’s policies are, with the cooperation of Central American countries, targeting asylum seekers well before they reach the southern border, and achieving the same effect.

There are six pillars to President Trump’s migrant deterrence policy.

Sending migrants back to Guatemala, Honduras and El Salvador

More than 975,000migrants have arrived at the Us’ southern border over the past year. They are mostly from the ‘Northern Triangle’ countries of Guatemala, Honduras, and El Salvador, where rampant crime, violence, and corruption is driving hundreds of thousands to flee. In those countries, migrants are commonly robbed, kidnapped for ransom, raped, tortured and killed.

The Trump administration issued a rule in July that prevents migrants from being granted asylum if they passed through any country other than their own before arriving in the US – meaning asylum seekers showing up at the southern border who are from any country but Mexico are effectively ineligible for asylum.

The Supreme Court has allowed that rule to temporarily go into effect across the border in September while a lawsuit over the rule makes its way through the courts.

Also, the administration has also brokered agreements with Guatemala, Honduras, and El Salvador that could allow the US to return asylum seekers to those countries.

About half a million migrants each year make their way through Mexico, many hitching rides on freight trains. Along the way, they are targeted by criminal gangs and frequently kidnapped.

While Mexico has refused to sign a “safe third country” agreement, which would allow the US to turn away migrants who did not first seek asylum in Mexico, it has started to cooperate with the Trump administration on immigration enforcement, stopping migrants in their tracks before they reach the US border.

In June, Trump threatened to impose tariffs on all Mexican goods unless Mexican President Andres Manuel López Obrador agreed to drive down the number of migrants arriving at the US southern border.

This has effectively turned Mexico into a bottleneck for asylum seekers. If detained and deported by Mexican authorities, they may never even be able to reach the US border in order to claim asylum.

Asylum seekers reaching the US’ southern border once had a choice. They could either lineup at a port of entry and wait to be processed by immigration officers or they could try to cross the border without authorisation.

Now, the Trump administration has made waiting untenable.

From mid-2018, the number of asylum seekers being processed at ports of entry each day was drastically reduced, forcing the others to wait in Mexico, where migrant shelters are at capacity and many have been forced to sleep on the streets.

Mexican immigration authorities say the numbers of those waiting is more than 26,000 and no one knows how long it will take or if they will ever be processed at the ports of entry.

No guarantee of even entering the US

Previously, both people who waited in line at the border and those who were apprehended after entering the US illegally were held at a processing facility until a border agent determined whether they should be released, transferred to ICE detention, or deported.

But now, most are quickly sent back to Mexico under the Trump administration’s “Remain in Mexico” policy, officially known as the “Migrant Protection Protocols” (MPP).

The policy applies to both those processed at ports of entry and those apprehended while trying to cross the border without authorisation.

It allows the government to send migrants with credible asylum claims back to Mexico while they await a final decision on their applications. Up to October, about 55,000 migrants have been subject to this policy.

They have been allowed to enter the US only to attend their immigration court hearings, and largely unable to access legal counsel.

A US federal court is currently considering a case challenging the policy and may end up blocking it.

Under the Trump administration, immigration authorities can now choose to detain them at facilities inside the US, no matter whether they have entered though a port or illegally.

The so called ‘zero tolerance’ policy coincided with a shift in the demographics of migrants turning up at the border; with families now making up the majority of those apprehended, rather than single adult males.

As a result, record numbers of asylum-seeking families have been sent to immigration detention who typically would have been released under previous administrations.

The administration claimed the practice of releasing families – so called ‘catch and release’ was encouraging migrants to come to the US and that keeping them in detention while their immigration cases were underway would deter further migration.

But the US does not have enough facilities licensed to detain families on the scale President Trump has sought. This led to the separation of more than 4,000 migrant families before a court ordered the practice to end in July 2018.

While still detained, most migrants seeking asylum usually have the opportunity to put their case before an immigration judge.

This can be a lengthy process, with migrants waiting an average of two years for a decision.

Immigration judges don’t operate in the federal court system and are overseen by the Department of Justice, the agency also charged with prosecuting migrants for crossing the border without authorisation.

Recently, Trump administration attorney generals have been whittling away the independence of immigration judges.

They have made it more for victims of gang violence and domestic abuse, LGBTQ individuals, and those whose family members have been persecuted to obtain asylum.

They’ve also introduced policy changes – including case completion quotas and time extensions – that they say were designed to reduce the backlog of cases in the immigration courts, which passed the one million mark in August.

Activists say that these interventions mean migrants are being denied a fair day in court.

There have also been calls for an investigation into the so-called ‘tent courts’, set up by the Department of Homeland Security. These courts see migrants and their lawyers video conference with judges and DHS lawyers appearing virtually, streamed from brick-and-mortar immigration courts hundreds of miles away.

Activists say the tent courts violate migrants’ due process rights by restricting their access to attorneys and relying on teleconferencing. They have also criticised the practice of excluding the public from entering the tent facilities and shrouding their operations in secrecy.

The US government also has the power to put some migrants in what’s called “expedited removal proceedings,” under which they can be deported in a matter of days without seeing a judge or an attorney. It currently applies to individuals who are arrested within 100 miles of a land border within two weeks of their arrival.