Human rights in retreat across the globe – Amnesty report

A world in disarray with millions suffering from disasters exacerbated by the climate crisis, violations of the right to life, health and social protection as well as rising gender based violence and the repression of dissent.

This is the bleak and alarming picture of human rights across the globe painted by a new Amnesty International report against the backdrop of the COVID-19 pandemic. 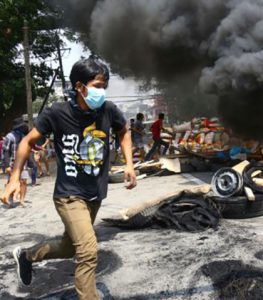 Amnesty’s ‘2020/21: The state of the world’s human rights’ report say that also, in both long-running and new conflicts, government forces and armed groups carried out indiscriminate and targeted attacks on civilians, killing thousands, and caused or prolonged mass displacement and humanitarian crises.

But the report says that by grounding measures aimed at recovery from the pandemic and other crises in human rights, world leaders have an opportunity to reset and resuscitate international co-operation to shape a more just future.

The report says the pandemic and some of the measures taken to tackle it had a devastating effect on the lives of millions, but also revealed, and sometimes aggravated, existing patterns of abuses and inequalities.

“Some had roots in discrimination based on race, gender and other grounds, which often intersected and rendered certain populations uniquely vulnerable. Those abuses and inequalities were spotlighted and vigorously challenged by people-powered movements such as Black Lives Matter and women’s rights campaigns, whose resilience led to a few hard-won victories,” the report says.

“The pandemic threw into stark relief the human rights impact of years of political and financial crises and flaws in global systems of governance and co-operation, which some states exacerbated by shirking their responsibilities or attacking multilateral institutions. These dynamics were illustrated by trends in three areas: violations of the rights to life, health and social protection; gender-based violence and threats to sexual and reproductive rights; and repression of dissent,” it says.

The report says that despite a few notable convictions for war crimes and crimes against humanity, impunity in times of war and peace remained the norm and, in some countries, the rule of law was eroded. Millions of people suffered from disasters exacerbated by the climate crisis.

COVID-19 killed at least 1.8 million people worldwide in 2020. Health systems and social protection programs, weakened by decades of underinvestment and a lack of preparedness, were ill-equipped to respond.

Workers’ incomes were hit by rising unemployment and inactivity, while the number of people facing acute food insecurity doubled to 270 million.

“Governments failed to adequately protect health and other essential workers. Thousands lost their lives due to COVID-19 and many others were taken seriously ill due to shortages in personal protective equipment (PPE),’ the report says.

It documents allegations that state authorities harassed or intimidated health or other essential workers in the context of the pandemic in 42 out of the 149 countries monitored; some faced reprisals, including arrest and dismissal, for raising concerns about safety or working conditions.

Women health and care workers were particularly affected as they comprised 70 per cent of the global workforce in the health and social sector, where they already experienced a significant gender pay gap, the report says.

And some government measures to tackle COVID-19 had a discriminatory impact on marginalized groups.

“Lockdowns and curfews led to particularly high numbers of workers in the informal economy losing their incomes without recourse to adequate social protection. Since they dominated the sector, women and girls were disproportionately affected. Another measure, the introduction of online-only education without ensuring access to appropriate technology, disadvantaged many learners from marginalized groups,” the report said.

“Women primarily bore the burden of home schooling, as well as other unpaid care resulting from closures of public services, including looking after sick relatives.

COVID-19 also worsened the already precarious situation of refugees and migrants, trapping some in squalid camps or detention facilities and leaving others stranded by border closures.

In 42 of the 149 countries Amnesty monitored, there were reports of refugees and migrants being subjected to refoulement – or being sent back into danger.

“In many countries, ethnic minorities and Indigenous peoples had disproportionately high rates of infection and death, due in part to pre-existing inequalities and lack of access to health care. Political and religious figures stigmatized marginalized groups, blaming them for spreading the virus. Muslims in some South Asian countries and LGBTI people in several African and European ones were among the targets,” the report says.

The hoarding of vaccines by rich countries and the failure of companies to share their intellectual property represented a failure of human rights.

“More than 90 countries introduced export restrictions affecting items including medical equipment, PPE, pharmaceutical products and food. Wealthy states also blocked adoption of a proposal at the World Trade Organisation for a temporary waiver of intellectual property rights for COVID-19 products that was designed to facilitate universal access,” the reports said.

The report outlines some advances in gender equity with new legislation to counter violence against women and girls passed in Kuwait, South Korea and Sudan.

It says some countries, including Croatia, Denmark, the Netherlands and Spain, took steps to improve their rape laws to make them consent-based. In several African countries there were unprecedented new laws aimed at ending impunity for rape and other sexual violence in peace and conflict.

But, in practice, gender-based violence, including ‘honour’ killings and caste-based, domestic and sexual violence, remained shockingly high worldwide with authorities generally failing to take action to prevent it.

The Amnesty report also included allegations of LGBTI individuals being arrested or taken into detention in 2020 because of their sexual orientation or gender identity in 24 out of the 149 countries it monitored.

It found that many governments repressed dissent and otherwise restricted civic space.

“In response to protests against unaccountable rulers, the erosion of social and economic rights and structural racism (such as those led by the Black Lives Matter movement), security forces misused firearms and less lethal weapons including tear gas, unlawfully killing hundreds and injuring many more,” the report says.

“They also targeted human rights defenders, journalists and political opponents with intimidation and arbitrary detention. Some had exposed corruption or human rights violations.

“In a few countries, particularly in Asia and the Middle East and North Africa, authorities prosecuted and even imprisoned human rights defenders and journalists using vaguely worded charges such as spreading misinformation, leaking state secrets and insulting authorities, or labelled them as ’terrorists’,” the report says.

Meanwhile, the report focused particularly on rising conflict in Africa and increased state control over media, the judiciary and daily life in central and south east Europe.

“Conflicts between states and armed groups are either continuing or even escalating in most parts of Sub-Sahara Africa and the situation has made the COVID-19 onslaught even worse,” the report says.

“Conflicts between states and armed groups and attacks on civilians have continued or escalated in most parts of Sub-Saharan Africa. In Southern Africa, the long simmering violent tensions in Mozambique’s Cabo Delgado province intensified into full-blown armed conflict,” the report said. “The Horn of Africa region saw an outbreak of conflict in Ethiopia’s Tigray region,” it says.

While in parts of Europe, the COVID-19 pandemic saw an increase in state control over the judiciary and media and further endangered minorities that already suffer from discrimination, the report says.

“COVID-19 has brutally exposed and deepened inequality both within and between countries in central and south east Europe, and highlighted the staggering disregard our leaders have for our shared humanity,” the report says.

It says governments “took insufficient measures to protect journalists and whistle-blowers, including health workers, at times targeting those who criticized government responses to COVID-19”.

This occurred in multiple countries, among them Albania, Bosnia and Herzegovina, Hungary, Kosovo, Poland, Serbia and Turkey.

Amnesty also said that during the pandemic, Serbia, Bosnia, Kosovo and Montenegro relaxed efforts to prosecute and punish perpetrators of war crimes committed in the wars of the 1990s.

“Serbia failed to indict any former senior police or military commanders for war crimes and resolution of the fate of missing persons stalled,” the report says.

And it notes that “the EU continued to struggle to address the ongoing erosion of the rule of law in Hungary and Poland, although it activated proceedings against the two states for risking a serious breach of the union’s core values”.