The UN has pulled out over half its remaining international staff from Yemen’s capital to protect them from the spread of COVID-19 as the country spirals into potentially the world’s biggest humanitarian crisis. 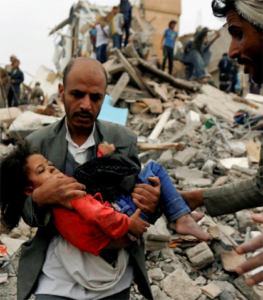 UNHCR has been supporting refugees and asylum seekers in Yemen through registration with the relevant authorities, provision of documentation and cash, as well as a wide range of protection, health care and education services.

Reports say almost 100 UN staff left Sana’a aboard two UN-chartered flights to Ethiopia earlier this month, bringing the number of foreign UN staff in the capital to about 60, down from 158.

The UN has declined to comment but an official from the World Food Program confirmed the agency had chartered flights out of Yemen.

Yemen is the UN’s largest humanitarian operation, costing $US3.2 billion so far.

Around 24 million people are reported to be in need of aid in the country, and the UN has targeted the 15 million most vulnerable, although funding shortages have forced its agencies and partner NGOs to scale back their work this year.

UNHCR and other UN agencies provide services to refugees and locals such as food, health and education.

The refugee program relies on a wide network of community outreach leaders and volunteers, health workers and local authorities. They work together to identify and refer refugees and asylum-seekers in need. But this has been disrupted by the COVID-19 pandemic crisis.

Yemen’s civil war began in 2014 when Houthi insurgents – Shiite rebels with links to Iran and a history of rising up against the Sunni government – took control of Yemen’s capital and largest city, Sana’a, demanding lower fuel prices and a new government.

In response, a Saudi-led coalition of west Asian countries launched an intervention in 2015 in support of ousted Yemeni president Ali Abdullah Saleh.

The conflict has become a stalemate and has worsened Yemen’s humanitarian situation, which has reached the level of a “humanitarian disaster” according to the United Nations.