A secondary humanitarian crisis is emerging in Uganda, where around half a million refugees are facing hunger and starvation because of cuts to food aid and the effects of the COVID-19 pandemic.

According to statistics published recently by the Integrated Food Security Phase Classification (IPC), more than 400,000 refugees are considered to be at crisis hunger levels and 135,130 children acutely malnourished and in urgent need of treatment. 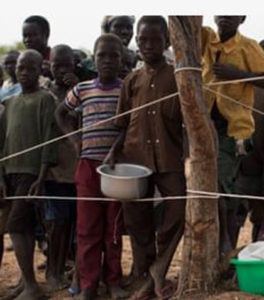 The World Food Program (WFP) cut food aid and cash transfers to more than 1.4 million refugees by 30 per cent in April, and has warned a further 10 per cent reduction may be required this month due to continued funding shortfalls.

The refugees have fled violence in neighbouring South Sudan, the Democratic Republic of the Congo and Burundi.

The cut came as the WFP was announced as the winner of this year’s Nobel Peace Prize.

Refugees’ livelihood activities have been also been reduced by COVID-19 lockdown restrictions and NGOs have warned food shortages will put many refugees at risk of starvation, and exacerbate tensions with host communities.

Activists have warned that the severe food shortages will push many of the refugees to the brink of starvation and will increase tensions within host communities.

In September, Uganda deployed security forces in the north-west region after clashes between local people and refugees at a water point led to the deaths of ten people.

Dismas Nkunda, executive director of Atrocities Watch Africa, told the Guardian newspaper said any further reductions in food aid would be a “near death trap” for refugees.

“We need to mobilise funds for these vulnerable people to live normal lives,” he said.

The refugees had already suffered, they must not now become victims of the COVID-19, he said.

Bidi Bidi, in northern Uganda, home to more than 232,000 people, is the most seriously affected by the food shortages.

A spokesman for the WFP in Uganda said the refugee camps had been hit by a perfect storm.

“Unfortunately, this coincided with the start of the Covid-19 crisis in Uganda and the subsequent lockdown restrictions by the government of Uganda, which were also put in effect in refugee settlements,” the spokesman said.

“Due to these movement restrictions, refugees were not able to work outside the settlements to add to the food assistance provided by WFP through earnings from agricultural work, or to take on other livelihood opportunities,” he said

The WFP needs $US15.3m to provide full rations to refugees living in settlements until the end of the year.