A row has broken out over plans to change the name of Melbourne’s iconic Immigration Museum. 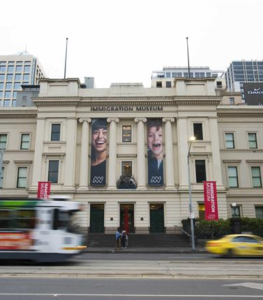 The name change was quietly revealed in April in a media release about a tattoo exhibition at the museum.

But the row erupted in earnest this month when the plan to change the museum’s moniker to the ‘Museum of Shared Humanity’ became more widely known.

Traditionally, the Immigration Museum has focused on sharing the stories of the successive waves of migrants who populated Melbourne post-settlement in 1835. These include immigrants from China and Germany during the Gold Rush; post-war migrants from Greece and Italy in the 1950s; the Vietnamese in the 1970s; and most recently, migrants from Iraq, Syria, Myanmar and Afghanistan.

“The museum was charged with the responsibility of partnering with multicultural communities yet there has been no partnership with the Greek Community. In the last three years we saw the permanent exhibition of passenger ships that carried our parents, grandparents, or great-grandparents to Australia, disappear from the Museum. Where once history stood now is an empty hall,” the newspaper thundered.

“The Immigration Museum has become an iconic Victorian institution, recognised internationally for preserving our shared immigrant heritage, valuing our rich and vibrant multicultural society and honouring our fore parents for the sake of our future generations,” Ms Pavlidis said in a statement.

“The ECCV is concerned about reports of a proposed name change and looks forward to working with Museums Victoria to continue to uphold and build upon the Immigration Museum as an iconic landmark,” she said.

“Any proposed name change is bound to have supporters and detractors. What’s critically important is that the Immigration Museum continues to bravely champion anti-discrimination and cultural equity alongside the celebration of our migration history,” she said.

“We need to have contemporary conversations about what a just society, built on diversity, can be. We are hearing lots of rhetoric about the need for greater diversity in the arts. Let’s keep our focus on the actions of cultural institutions, and not get caught up on the semantics,” Ms Pardo said.

In a media statement, the Immigration Museum’s General Manager, Rohini Kappadath said: “As Victoria’s population grows and evolves, it’s important that we do too. We’re looking at how we can continue to share Victoria’s immigration stories while expanding to include stories of human experiences that connect us across communities.”

“Our process is underway and still ongoing. We have begun with audience research and over the next six months will convene roundtable discussions to hear from our communities, visitors, members and stakeholder groups.

“As part of this project we are asking people to think about our name and its relevance today, however, this is one of many questions we are aiming to understand. We’ll wait to hear feedback and assess research results before proceeding,” Ms Kappadath said.

The Hellenic section of the museum has since moved to the old Mint building in William Street.