Introducing the Parliament of Victoria to CALD communities

The Parliament of Victoria has released some in-language videos produced in Arabic to explain the workings of parliament to new arrivals from the Middle East.

AMES Australia representatives Osama Butti and Amira Awad Almsallam spoke to the cameras in Arabic to explain what happens in Parliament. 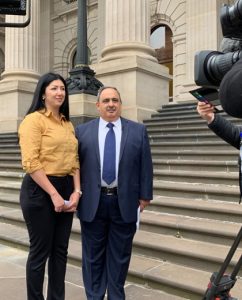 They told how the Spring Street building is where Victoria’s laws are made and where our elected representatives debate issues of importance to all of us.

Osama and Amira explained how the sittings of Parliament are open to the public and tours of the building are available.

“Parliament House was built during the gold rush era of the 19th century. Many Chinese people worked in the Victorian goldfields and their achievements are part of our state’s rich heritage,” they said.

“Here on the walls of Parliament House you can still see the gold leaf that came from the goldfields outside Melbourne. Victoria’s Parliament first met here in 1856.

“State elections for parliament are held every four years. We have two houses of parliament.  New laws and changes to existing laws must be approved by both houses before they become a law.

Sitting on the other side is the Leader of the Opposition. In our parliament, the Opposition keeps a check on the government by asking questions of government ministers,” the video explained.

It said that ‘Question Time’ was one of the popular sessions that people like to come and watch. The Premier and ministers are asked questions and the debate can be very lively.

The parliament also has many committees, where members from all parties work together to come up with recommendations to help solve issues in the community, it said.

There are committees on health, education, the economy, family and social issues. Committees will invite people from the community to speak with them about issues they are examining. They then present reports to parliament, the video said.

Osama is from Iraq and undertakes a range of casual roles with AMES, most recently as a Community Champion raising awareness of the NDIS to CALD communities and Amira is from Syria and was a Humanitarian Settlement Program client with AMES.