Home » Latest Articles » Is the US ending its refugee program?

Is the US ending its refugee program?

The US is set to effectively end its refugee settlement programs as the Trump administration again moves to drastically cut the number of refugees admitted to the country, according to reports from Washington.

The New York Times has reported that White House is considering several options for the future of the US refugee program and all would effectively signal the end of it. 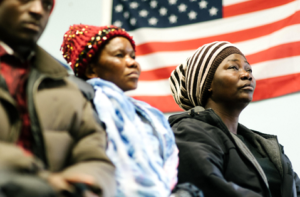 One option is a plan that would see a zero regular annual intake and only allowing the president to admit refugees during an emergency.

Another option would cut refugee admissions down to 10,000 or 15,000—far fewer than this year’s already-low cap of 30,000 refugees – and save the spots for refugees from “a few handpicked countries or groups with special status,” such as Iraqi and Afghan citizens who help the American military and intelligence services.

The few refugees who could settle in the US may then face additional roadblocks, because other reports say the Trump administration is also considering allowing states and cities to individually deny entry to refugees.

The New York Times has reported that the administration’s culling of the refugee program is being done at the urging of Trump’s anti-immigration adviser Stephen Miller.

Miller’s anti-refugee views have previously been refuted by the Pentagon with former Secretary of Defence James Mattis defending the need for admitting refugees who have served with American troops.

Recently, high-ranking military officials have picked up Mattis’s arguments, with 27 retired generals and admirals sending a letter to Trump earlier this week to criticize the administration’s planned cuts.

The officials called the refugee program a “critical lifeline” for those who help the American government abroad, and said even the current 30,000 cap is “leaving thousands in harm’s way.”

“We urge you to protect this vital program and ensure that the refugee admissions goal is robust, in line with decades-long precedent, and commensurate with today’s urgent global needs,” the letter said.

Even if the Trump administration agrees to admit refugees who worked with American officials, the number of successful refugees would still be far lower than those with a need to re-settle.

The Wall Street Journal reported that 107,000 Iraqis who have helped American troops are waiting to be processed as refugees to the US; in addition to the more than 100,000 refugees currently on a referral list for possible American re-settlement.

Curbing immigration remains the Trump administration’s signature policy and the conservative-leaning US Supreme Court has made it vastly more difficult for people to win asylum.

Recently, the administration invoked a ban on all people from Central America from seeking asylum.

This was promptly overturned by a federal court judge in San Francisco. But after an application directly to the Supreme Court by government lawyers, the ban was reimposed.

Jurists and commentators have raised concerns about the Trump administration’s frequent appeals directly to the Supreme Court which sets a dangerous precedent.

In another move designed to stop asylum seekers entering the US, the Department of Homeland Security has said it planned to spend $US155 million to build and operate the tent courts on the border with Mexico.

Critics have slammed the plan because the tent courts are closed to the public and pose difficulties for lawyers to access to provide legal representation.

Meanwhile, America’s Catholic bishops have said the proposal to reduce the number of refugee admissions to the United States to fewer than 30,000 “would be wholly counter to our values as a nation of immigrants”.

“America welcomes refugees; that is who we are, that is what we do. Such reductions would undermine America’s leadership role as a global champion and protector of religious freedom and human rights,” they a joint statement of the US Conference of Catholic Bishops and the chair of the bishops’ Committee on Migration.