Thousands of Karen refugees fleeing the armed conflict in Myanmar are stranded along the banks of a river that forms the border with Thailand with no access to shelter, food or medicine, aid groups have reported.

The Karen, trapped along the Salween River, are part of a minority that has long suffered persecution by the Myanmar military. 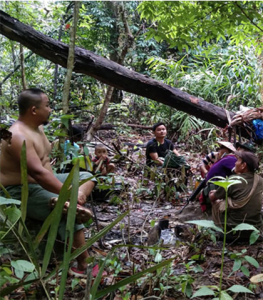 Aid groups have called on the Thai military to allow humanitarian aid to be delivered to the border.

The Karen Peace Support Network (KPSN) has claimed in an online discussion that as many as 70,000 people, or about 90 per cent of the rural population in Myanmar’s Karen state have been displaced by conflict over the past three months.

The KPSN said military offensives carried out by the Myanmar military – which include heavy shelling as well as air strikes – have destroyed many villages along the border, forcing at least 7,600 people from 43 villages to flee for their lives.

Many are hiding in the jungles, while around 5,500 people are now trying to cross the border into Thailand in search of a safe refuge, she said.

Other reports says many Karen have been pushed back into Myanmar by Thai troops.

“Many of the refugees are pregnant women, children and the elderly, and some were injured by the fighting. They are in urgent need of food, medicine, shelter, sanitation and water,” a KPSN statement said.

“If villagers cannot plant rice this season, the situation will become much worse.”

The statement called on the Thai government to provide protection and shelter for the refugees, in addition to allowing humanitarian aid to be distributed.

It also asked the international community to impose an arms embargo on Myanmar and cut off all forms of economic support for the military regime.

Karen people see Thailand as a safe haven from the prolonged armed conflicts at home. The Karen State has been a battleground between the Myanmar military and minority ethnic groups for many decades.

Melbourne Karen community leader Hsar Ju said that over the past few months around 4,000 people have crossed the Thai border and been detained by the army before being sent back to Myanmar.

“But they are now being sent back into danger. The international community needs to put more pressure on the Myanmar military to stop this campaign which is effectively ethnic cleansing,” Mr Ju said.

Many towns and communities have been transformed into battlefields, displacing thousands across Myanmar. In addition to the thousands stranded along the Thai-Myanmar border, at least 6,000 people have sought refuge in India.

The KPSN said aid was urgently needed, and the Thai army should lift travel restrictions to the border and let humanitarian workers bring in the food and supplies needed by the thousands of refugees.

“If the international community does nothing to stop the violence in Myanmar from escalating and deliver aid, the influx of refugees could destabilise not just the Thai-Myanmar border, but the entire region,” the agency said.

The Thai army has said it has not stopped refugees from crossing into Thailand, saying soldiers had provided food and basic supplies for the refugees during their stay on the Thai side of the border.

But a spokesman said the risk of armed clashes and COVID-19 transmission as reasons for barring access to the border, saying it wasn’t safe for humanitarian agencies or the press.