Australia’s Lebanese communities are rallying to support the victims of the massive explosion that ripped through Beirut killing hundreds of people.

Religious and political leaders from Australia’s Lebanese community reacted with shock and dismay at the disaster. 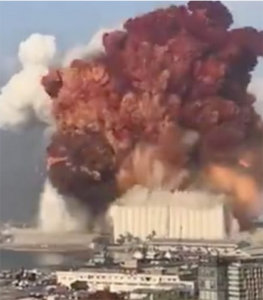 Charity funds to help the victims are being organised. The explosion of stored fertiliser at Beirut’s port devastated a large portion of the city leaving 300,000 people homeless.

It came as the country’s economic situation has been worsening in recent months because of government mismanagement, corruption and the COVID-19 pandemic. Lebanon is also home to the largest per capita number of displaced refugees – around 1.5 million.

The head of the Christian Maronite Church in Australia Bishop Antoine-Charbel Tarabay told media that his congregation had been “in tears”.

He said plans were in motion to establish a fund for parishioners to donate to, which he hoped would be a collaborative effort involving all faiths within the Australian Lebanese community.

“It’s very sad and I would like to extend my condolences to the families of the people who died and also my support and solidarity with the people who were injured,” the Bishop said.

“I’m going to ask our Maronite community to offer prayers for Lebanon, for Beirut, for the people there and at the same time, we’re going to put together a crisis committee to start doing what we can do to help and support the families of those who are affected by this

The President of Legislative Council of Victoria, Nazih Asmar, said the explosion is likely to compound the misery and hardship for the people of Lebanon.

“It’s too much for the people of Lebanon with the suffering they are going through,” he said.

“There is a lot of sadness within the community. We are very frustrated, and we will show a lot of sympathy to the families of the victims.

Meanwhile, Aid organisations also fear the damage inflicted on the city’s port will cause supply shortages of essential items such as food, fuel and medical supplies.

The Australian Red Cross is encouraging people to directly donate to the Lebanese Red Cross.

As one of the country’s main providers of ambulance services, the Lebanese Red Cross was one of the first organisations to provide emergency medical aid in the aftermath of the blast.

According to the group, at least 75 ambulances and 375 paramedics and staff were quickly on the scene helping the injured.

Members of its Lebanon office are helping paramedics and ambulances provide first aid to injured civilians and transport victims to hospital.

The organisation says donations to its emergency appeal will help provide hygiene kits, food parcels, medical aid and fund the reconstruction of homes in Beirut.

Muslim Aid Australia is another Australian-based charity liaising with teams on the ground in Lebanon.

The organisation is hoping to provide hot food packs for residents, help facilitate the operation of mobile blood donation vehicles and provide other emergency aid.

Impact Lebanon is a UK-based non-profit which aims to help members of the worldwide Lebanese diaspora give back to their home country.

Impact Lebanon says it is currently in touch with several NGOs to determine how the money will be spent.