Images of endless lines of forlorn asylum seekers fleeing conflict and persecution would seem to be a phenomena of the modern age.

But ancient Greece had its share of social and political upheaval that saw people leaver their home cities and towns to seek sanctuary elsewhere. 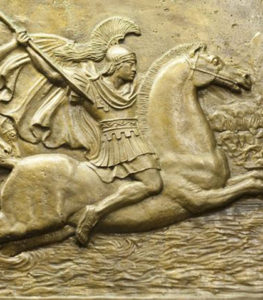 Indeed, the word ‘asylum’ is derived from the Greek ‘asulia’, which describes the circumstances of a person who is protected only by the gods.

Thousands of asylum seekers in ancient Greece were exiled as a result of civil unrest; and there may be some lessons for modern leaders from how asylum seekers were treated in antiquity.

Dr Robert Garland, of Colgate University in New York State, has made a study of the exile of the ancients.

“Many Greek cities were subject to ‘stasis’, that’s to civil upheavals, due to tension between those who favored power being in the hands of the entire citizen body and those who favored giving power to the oligarchs. Those upheavals frequently led to the expulsion of democrats by oligarchs or of oligarchs by democrats; depending on who got the upper hand,” Dr Garland said.

“Another group of asylum seekers were those who fled from their homeland to avoid enslavement after their city was captured in the war,” he said.

In the 6th Century BC, the Greek philosopher Plutarch described the city as “teeming with people constantly migrating to Attica from all over the Mediterranean, seeking refuge”.

People in the ancient world were understandably desperate to escape their cities in the event of it being captured by an enemy. Conquering armies routinely slaughtered men and sold women and children into slavery.

The Trojan prince Aeneas fled when the Greeks captured his city becoming the most famous refugee in the ancient world. His escape from Troy and subsequent wanderings were the subject of Virgil’s classic Roman poem ‘The Aeneid’.

Dr Garland said there was a well-established procedure that asylum seekers had to follow.

“After arrival on foreign soil, they headed for the nearest sanctuary, where they formally adopted the guise of a suppliant by clutching an olive branch wound around with a white wreath in their left hand; this meant that they were now under the protection of the gods,” he said.

“The asylum seekers attracted the attention of the local inhabitants, who reported them to the demos, the people of Athens. A contingent of soldiers arrived and ordered them to quit the sanctuary while they or their leader was escorted away to make a case before the people of Athens,” Dr Garland said.

“Asylum seekers had to convince the Assembly of citizens that it was in their best interest to let them stay because they had something to offer to them in return. For instance, if some of them were of military age, they offered to fight on behalf of their adoptive country,” he said.

The Assembly then voted and if their appeal was successful a decree was issued giving them permanent residence.

There may be some lessons from the ancient world for modern leaders grappling with issues around irregular migration.

In the 4th Century BC, the refugee problem reached a crisis point. In 324, Alexander the Great took the revolutionary step of creating a Pan-Hellenic, all-Greek amnesty for refugees.

He permitted them to return to their own cities and reclaim the property they had owned prior to their banishment.

“Though it would have been a bureaucratic nightmare, as some of the people who returned had been refugees for 30 years or more, but Alexander at least made an attempt to redress a serious grievance,” he said.