A young refugee with severe disabilities has gained a level of independence unimaginable just months ago and has been supported into education by AMES Australia’s Humanitarian Settlement Program (HSP) team.

Seventeen-year-old Reza and his parents Hossein and Sima arrived in Australia in November, 2019, after fleeing religious persecution as Christians in Iran. 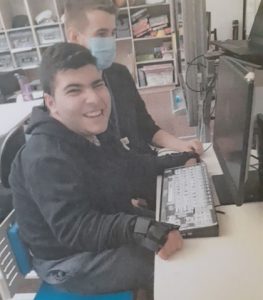 The family spent three difficult years living in limbo in Turkey uncertain about their future before settling in Craigieburn, in Melbourne’s north.

Life in Australia was also challenging for Reza’s family at first. With few links and their struggles with Reza’s disabilities, the family suffered social isolation.

This is where his Case Manager William Paul and the AMES team stepped in.

“Reza is wheelchair bound and requires the care of another person for all his daily activities. Upon arrival, Reza had only a basic manual wheelchair, on which he was unable to balance himself and was at risk of falling,” William said.

“Reza’s mother Sima has a heart condition which prevented her from the doing the physically demanding role of caring for Reza and it was a huge strain for Reza’s Father Hossain to lift Reza and sit him in the wheelchair, a sofa, a bed or in a car,” he said.

“Hossein struggled to push the wheelchair on elevated ramps in many places and caring for Reza and accompanying him using wheelchair caused muscle and pack pains for Hussain.

“By the time the family arrived Australia, Reza has already missed a few years of schooling, even though he was eagerly waiting to attend a school, he was limited due to his disability and not able to manage on his own at school. This was a major worry for the entire family,” William said.

Reza’s family also had difficulty getting him to appointments and assessments at the Royal Children Hospital because of transport issues and his wheelchair.

To support the family, AMES Australia Dallas staff organised supported transport for the family and liaised with external services to get funding for the family to use taxis.

William also spoke medical professionals and social workers at the Royal Children Hospital and ensured that Reza got a suitable wheelchair with safety harnesses.

He referred Reza to the NDIS and organised a faster assessment to ensure that he is approved for an NDIS plan.

William also supported Reza’s family to get him assessed and enrolled at Glenroy Special Needs School where he’s been attending since the start of 2020.

When COVID-19 restrictions interrupted Reza’s schooling, William rallied a diverse range of stakeholders and services to get the required long term care, therapy, services and equipment and for Reza.

“Now, Reza is happily attending school again using the school transport system. He is receiving NDIS services with a support person to assist him at home and to be able attend community and social activities,” William said.

“This has made life easier for Reza as well as for his parents. Reza was spoon fed by his parents until recently. At school, he recently learned to eat without any assistance using modified dishes and cutlery,” he said.

“Reza is also learning art and music and how to use tech devices in addition to his regular subjects. Planning has commenced for his transition from school to the next level and he is interested in becoming as a pastor at his church.

“This family still have much to achieve in their life in Australian, but they have progressed well with the support provided through HSP’s Specialized and Intensive Support Services.

“It is great to see that Reza is progressing well in school and getting NDIS support to be independent,” William said.

Reza and his family are finally looking forward to the future

“We are thankful to the Australian Government and AMES Australia for changing our lives and especially for bringing a positive change in Reza’s life,” Hossein said.